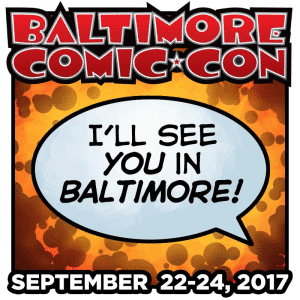 Baltimore Comic-Con is pleased to present our fans with an early holiday gift — tickets will be on sale from Black Friday to Christmas at a discount rate for next year’s show, taking place the weekend of September 22-24, 2017 at the Baltimore Convention Center in downtown Baltimore.

Tickets that are now on sale include:

* VIP packages are a separate purchase from General Admission tickets (which will be required to participate in any VIP offerings). VIP ticket holders receive exclusive early admission to all three days of the show, as well as a gift package that includes a show t-shirt, the 2017 Baltimore Comic-Con yearbook, and more!

“Every year, we get asked if we can provide tickets early enough for holiday gifts or Valentine’s Day gifts or birthday gifts, but we have been unable to make that happen… until now!” said Marc Nathan, show promoter for the Baltimore Comic-Con. “We’re thrilled to announce that, through the holiday weekend, tickets are available for our 2017 event at a discounted rate and, if you’ve peeked at our website, you know our our guest list is already growing with some great new and returning guests, CGC is with us again to do on-site grading, and we began selling our 2017 show floor space to exhibitors and retailers before last year’s show even ended.”

Visit www.baltimorecomiccon.com/tickets/ for more information and to purchase your advanced tickets!