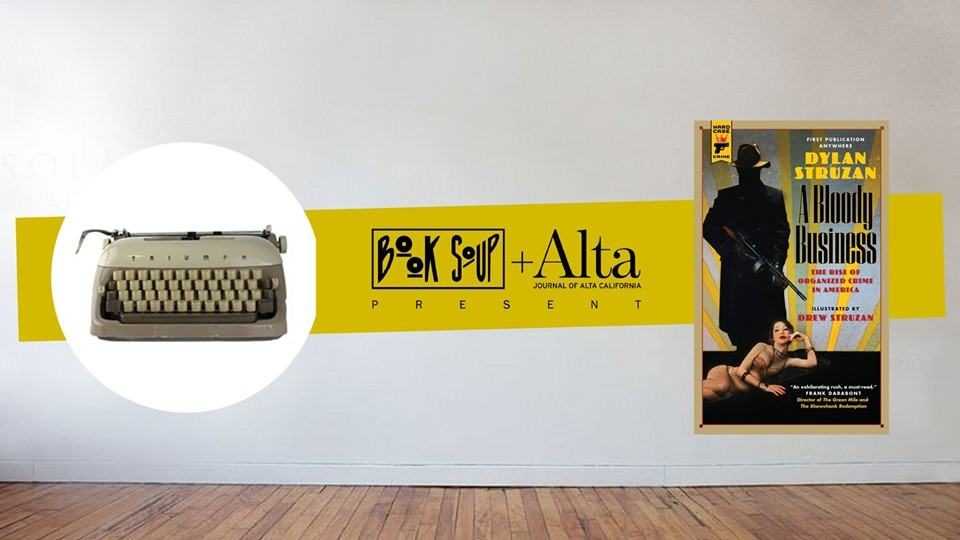 Dylan Struzan discusses and signs A Bloody Business at Book Soup on Wednesday, May 15, 2019 at 7 PM. Dylan will be joined by her husband, movie poster artist Drew Struzan, whose illustrations are found throughout A Bloody Business.

In 1919, the National Prohibition Act was passed, making it illegal across America to produce, distribute, or sell liquor. With this act, the U.S. Congress also created organized crime as we know it. Italian, Jewish, and Irish mobs sprang up to supply the suddenly illegal commodity to the millions of people still eager to drink it. Men like Lucky Luciano and Meyer Lansky, Dutch Schultz and Bugsy Siegel, Al Capone in Chicago and Nucky Johnson in Atlantic City, waged a brutal war for power in the streets and on the waterfronts. But if you think you already know this story…think again, since you’ve never seen it through the eyes of one of the mobsters who lived it. Called “one of the most significant organized crime figures in the United States” by the U.S. District Attorney, Vincent “Jimmy Blue Eyes” Alo was just 15 years old when Prohibition became law. Over the next decade, Alo would work side by side with Lansky and Luciano as they navigated the brutal underworld of bootlegging, thievery and murder. Alo’s later career included prison time and the ultimate Mob tribute: being immortalized as “Johnny Ola” in The Godfather, Part II.

Introduced to the 91-year-old Alo living in retirement in Florida, Dylan Struzan based this book on more than 50 hours of recorded testimony–stories Alo had never shared, and that he forbid her to publish until “after I’m gone.” Alo died, peacefully, two months short of his 97th birthday. And now his stories–bracing and violent, full of intrigue and betrayal, hunger and hubris–can finally be told. (Hard Case Crime)