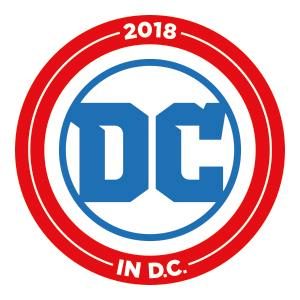 Get ready for “DC in D.C.” During the Martin Luther King, Jr. holiday weekend, Warner Bros. Television Group, DC Entertainment and Warner Bros. Home Entertainment will team up for “DC in D.C.” a landmark pop culture event that brings together the worlds of entertainment and public service to illuminate the story of America and current issues through the lens of comics and Super Heroes. Events will take place Friday, January 12, and Saturday, January 13, 2018, at the Newseum, and will culminate with the world premiere screening of the upcoming DC series Black Lightning — based on the first African-American DC Superhero to have his own stand-alone comic title — in the Warner Bros. Theater at the Smithsonian’s National Museum of American History, with a party to follow at the National Museum of African American History and Culture.

“DC in D.C.” brings together stars and producers from Warner Bros. Television’s DCTV series, as well as comic book writers and artists from DC Entertainment, who will join invited guests from politics, government service, entertainment, business, academia and more. The event will explore the intersection of comic books, culture, entertainment and enlightenment through a series of panel discussions open to the public. Additionally, “DC in D.C.” will present the premiere screening of the DC Universe animated movie Batman: Gotham By Gaslight (for ages 18+) at the Newseum.

Highlights of the “DC in D.C.” event schedule include: 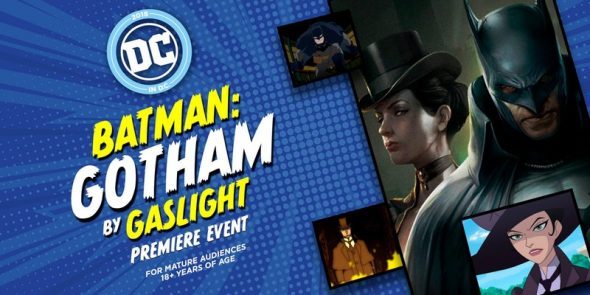 6:30–9:15 p.m. Batman: Gotham By Gaslight Premiere Screening (For Mature Audiences 18+ Years of Age) — Warner Bros. Animation and DC Entertainment provide a new take on Batman as a steampunk Dark Knight hunts Jack the Ripper through the shadows of turn of the century Gotham City in this all-new animated feature available from Warner Bros. Home Entertainment January 23, 2018, on Digital and February 6, 2018, on Blu-ray and DVD. The premiere event is for mature audiences 18 years of age or older, will kick off with a cocktail reception and will be followed with a Q&A session with the film’s voice cast and producers.  Newseum Theatre (**SOLD OUT**)

Inspired by the landmark one-shot Elseworlds tale by Brian Augustyn and Mike Mignola, Batman: Gotham By Gaslight takes place at the turn of the century as America’s continued industrial revolution is to be showcased at a World’s Fair hosted by Gotham City. But while the world prepares to witness the glittery glory of Gotham’s technological advances, there is a killer loose in the city’s darkest shadows. Preying on the city’s women, this killer is as precise as he is cruel. As Police Commissioner James Gordon (Scott Patterson – Gilmore Girls) tries to calm the fears of Gotham’s citizens regarding the butcher called Jack the Ripper, the masked vigilante Batman (Bruce Greenwood – American Crime Story) indulges in his own detective work — with the help of confident, capable Selina Kyle (Jennifer Carpenter – Dexter) — to stop the Ripper’s murderous spree. Witness a world in flames as the notorious serial killer’s controlled savagery meets the calculated stealth of the Dark Knight. Sam Register, Bruce Timm (Batman: The Killing Joke), Benjamin Melniker and Michael Uslan are executive producers. 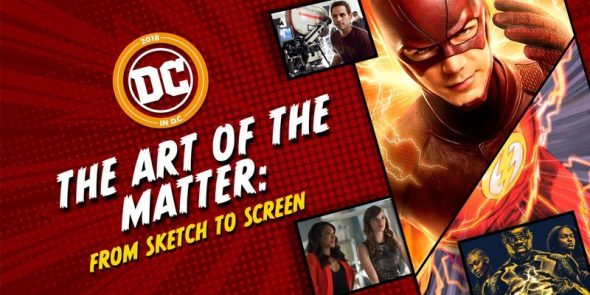 10:00–10:45 a.m. The Art of the Matter: From Sketch to Screen — Just how do our favorite DC Super Heroes fly from the page to the screen? This behind-the-scenes look at the creative process provides an “origin story” of how some of DC’s greatest Super Heroes on the page have evolved into some of TV’s hottest Superheroes on screens all over the world. Join executive producers Greg Berlanti and Sarah Schechter (Arrow, Black Lightning, DC’s Legends of Tomorrow, The Flash, Supergirl, upcoming Titans), DC Entertainment’s Geoff Johns (Arrow, The Flash, Titans) and others as they trace the explosion of DC’s heroes — from ink panels to television and film screens worldwide. Additional panelists to be announced.  Newseum (**SOLD OUT**) 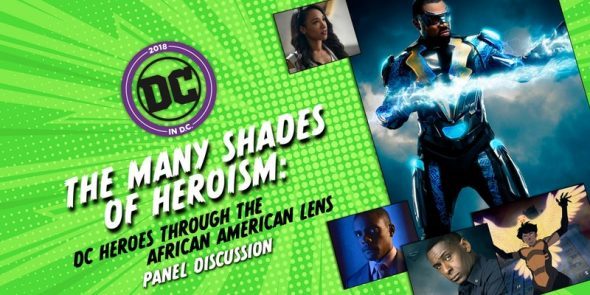 11:00–11:45 a.m. The Many Shades of Heroism: DC Heroes Through the African-American Lens — 2018 will not only bring Black Lightning, a new African-American DC Superhero to television screens (40 years after the electrifying hero was created), but also a new DC comic book from Oscar®-winning screenwriter John Ridley (12 Years a Slave) and more exciting storytelling featuring African-American characters. In this panel, Black Lightning star Cress Williams and executive producers Salim Akil & Mara Brock Akil will join the acclaimed John Ridley, author and comic book writer Alice Randall (The Wind Done Gone, Earth M), and Black Girl Nerds Editor-in-Chief Jamie Broadnax as they look beyond the super suit to the African-American men and women who are heroes to their community. Black Lightning premieres Tuesday, January 16, 2018, at 9/8c on The CW. Follow Black Lightning on Twitter at @blacklightning.Additional panelists to be announced.  Newseum (**SOLD OUT**) 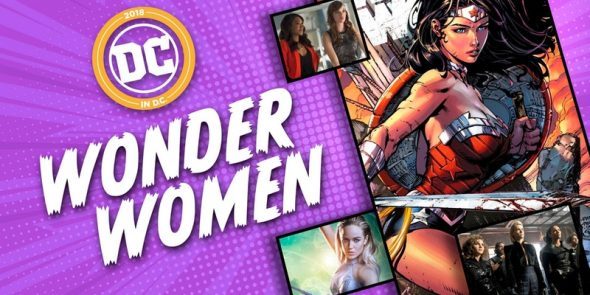 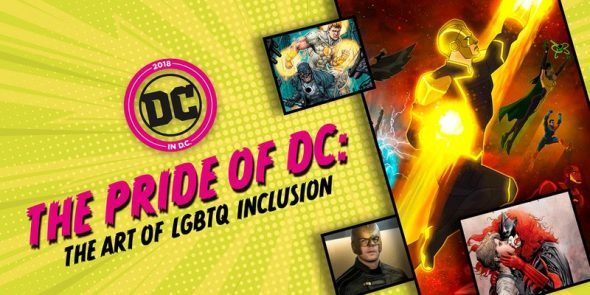 2:00–2:45 p.m. The Pride of DC: The Art of LGBTQ Inclusion — On December 8, history was made with the debut of Freedom Fighters: The Ray, a new animated series on CW Seed, the digital channel of The CW Network, that features the first gay Superhero to lead a show. The series is produced by Berlanti Productions in association with Warner Bros. Animation and Blue Ribbon Content, the digital studio of the Warner Bros. Television Group. Join The Ray executive producer Greg Berlanti and voice star Russell Tovey for a wide-ranging discussion with DC writers Marguerite Bennett (Batwoman), Steve Orlando (Midnighter and Apollo) and Mark Russell (Exit Stage Left: The Snagglepuss Chronicles) about inclusion for LGBTQ characters. Watch Freedom Fighters: The Ray here... Additional panelists to be announced.  Newseum (**SOLD OUT**) 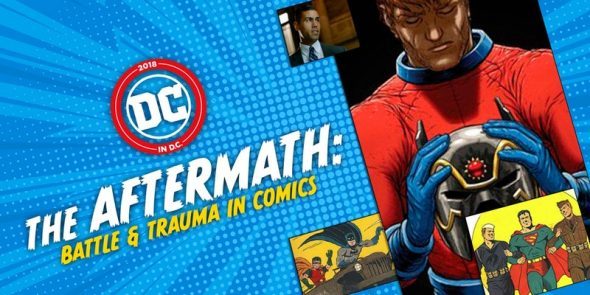 3:00–3:45 p.m. The Aftermath: Battle & Trauma in Comics — DC’s Batman author and former CIA counter-terrorism operations officer Tom King takes on Jack Kirby’s Mister Miracle in a new monthly comic book which focuses on a Superhero who grapples with post-traumatic stress disorder, an issue not often seen in comics and tragically overlooked in the real world. King will be joined by Gotham recurring guest star J.W. Cortes (a 13-year Marine combat veteran and a police officer with New York Metropolitan Transportation Authority), additional comic book writer/artists and thought leaders for a candid conversation about the lasting effects of battlefield trauma. Additional panelists to be announced.  Newseum (**SOLD OUT**) 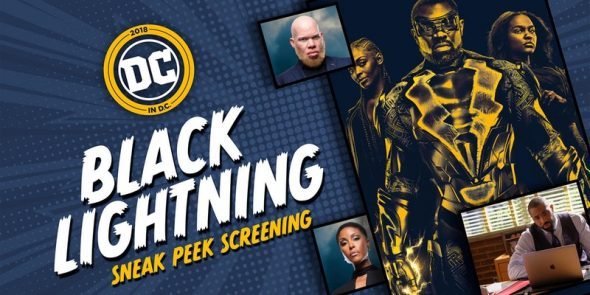 6:30–8:15 p.m. Black Lightning Sneak Peek Screening — Cress Williams (Hart of Dixie, Friday Night Lights) stars as the title character in Black Lightning, a new television series based on the first African-American DC Superhero to have his own stand-alone comic title. The series debuts Tuesday, January 16, 2018, at 9/8c on The CW, but fans can get a sneak peek during this public screening at the Newseum, preceded by a reception. In addition to Williams, China Anne McClain (House of Payne), Nafessa Williams (Twin Peaks), Christine Adams (Marvel’s Agents of S.H.I.E.L.D.), Marvin “Krondon” Jones III (Harry’s Law), Damon Gupton (Bates Motel, Criminal Minds) and James Remar (Gotham, Sex and the City) star. Based on the characters from DC,Black Lightning is from Berlanti Productions and Akil Productions in association with Warner Bros. Television, with executive producers Greg Berlanti (Arrow, DC’s Legends of Tomorrow, The Flash, Supergirl), Salim & Mara Brock Akil (Being Mary Jane, The Game, Girlfriends), and Sarah Schechter (Arrow, DC’s Legends of Tomorrow, The Flash, Supergirl). The Black Lightning character was created by Tony Isabella with Trevor Von Eeden.  Newseum **SOLD OUT**