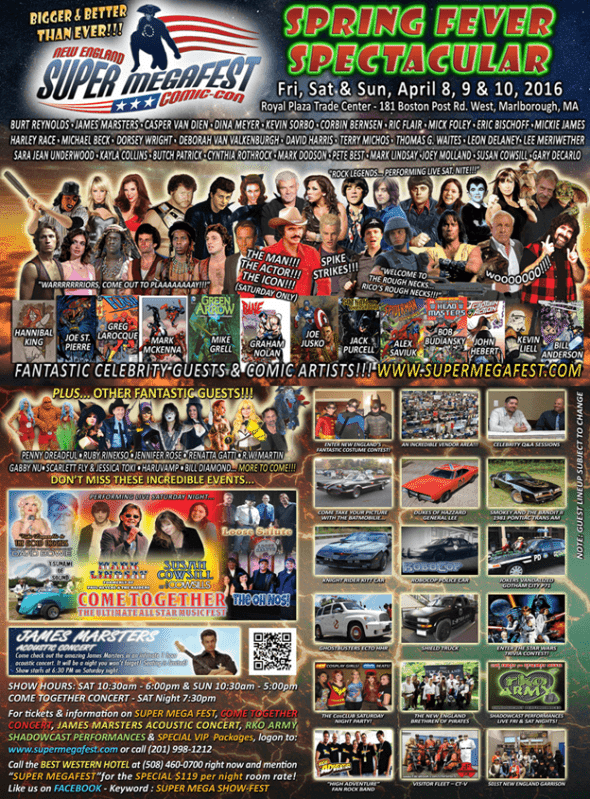 THE BIGGEST SUPER MEGAFEST YET!

Tickets are now on sale!

ORDER TICKETS ONLINE for super easy check in with print or selfie tickets!

Comic, Movie and TV fans will be thrilled with the rare appearances of:

JAMES MARSTERS  – Spike of Buffy/Angel, Smallville,Torchwood, Caprica and much more!

KEVIN SORBO – Star of Hercules, Andromeda and much more!

KADROLSHA ONA – Queen of the Paranormal!

MARK LINDSAY – formerly of Paul Revere and the Raiders!

SUSAN COWSILL – of The Cowsills

GRAHAM NOLAN  – Inkpot Award winning cartoonist best known for BATMAN in Detective Comics and as the de-signer of BANE!

BOB BUDIANSKY  – comic book writer, editor, and penciller, best known for his work on Marvel’s Transformers comic and much more!

JACK PURCELL – Artist JSA, Guardians of the Galaxy, Batgirl plus much more!

BILL ANDERSON – Artist for hundreds of comics for Marvel, DC, Image, Comico, First and many more!

The stars will be signing autographs and doing Q & A sessions with fans throughout the day. Professional photos with most celebrities will be available on site!

X-Men and other Marvel and DC writers and artists will give panel discussions and mingle with celebrities and costumed fans!

The Super Megafest presents the best exhibitors on the East Coast with one of the largest selections of comics, toys, videos, non-sports cards and memorabilia from Comics, TV, Movies, and Rock & Roll that you will ever find!

Other attractions include an amazing Costume Contest (including a children’s category), stunning Movie Cars, mischievous Pirates and much more!  After hours, enjoy a multitude of shadowcast movie performances and parties, including the COME TOGETHER MUSIC FEST and CosCLUB DANCE PARTY, ensuring the event has something for all ages.