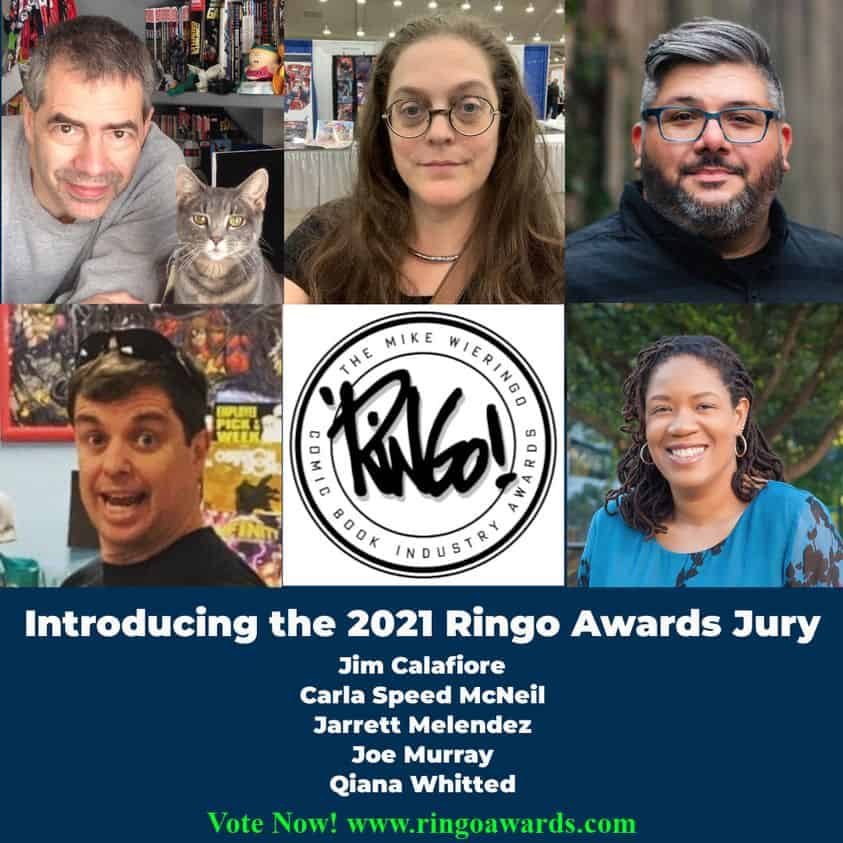 The Mike Wieringo Comic Book Industry Awards is an annual celebration of the creativity, skill, and fun of comics. The awards will be presented on Saturday, October 29, 2022 as part of the fan- and pro-favorite convention, The Baltimore Comic-Con. The Ringo Awards is currently in the midst of the 2022 nomination process, which is inclusive of fans and comic book professionals alike. Please submit your nominations before voting closes at midnight on June 30, 2022.

An esteemed jury of comics professionals will participate in the nomination process, selecting favorite works in over 20 categories. The 2022 jury was chosen as a representative cross-section of the comic book industry, with members representing seasoned and venerated educators, retailers, and creators across numerous genres.

In 30-plus years working in comics, Jim Calafiore has worked on Peter David’s Aquaman, Judd Winnick’s Exiles, Gotham Underground with Frank Tieri, Red Lanterns with Charles Soule, various Batman books, Deadpool, and Black Panther. After a run on the critically-acclaimed Secret Six with Gail Simone, they reunited with for their creator-owned success Leaving Megalopolis. He’s currently working on his creator-owned supernatural-comedy saga, NED, Lord of the Pit.

Finder, the science fiction series Carla Speed McNeil started in 1996, was “born” in Maryland, and so were her two kids and three cats. She and her husband were born and raised in Louisiana, but we’ve lived here longer than we ever lived there, which is a funny thought sometimes. She’s won an Eisner, several Ignatzes, and the LA Times Book Prize. She teaches comics at MICA in Baltimore, and her COVID hobb-session is making teeny tiny doors.

Jarrett Melendez grew up on the mean, deer-infested streets of Bucksport, Maine. A longtime fan of food and cooking, Jarrett has spent a lot of his time in kitchens, oftentimes as a paid professional! Jarrett is a regular contributor to Bon Appetit and Food52, and is the author of The Comic Kitchen, a fully illustrated, comic-style cookbook. When not cooking and writing about food, Jarrett usually writes comic books and graphic novels, including Chef’s Kiss from Oni Press, and has contributed to the Ringo-nominated All We Ever Wanted, Full Bleed, and Murder Hobo: Chaotic Neutral. He is currently writing a graphic memoir for Oni Press. Jarrett lives in Somerville, MA, with his collection of Monokuro Boo plush pigs.

Joe Murray’s auspicious introduction to the world of comics was through the inauspicious Marvel toy tie-in comics of ROM, Micronauts, and Shogun Warriors, but they were enough to get him hooked. After earning a degree in English Literature and the job prospects that opened up (at graduation he was given a diploma and told he could never afford to turn down a free meal), he inveigled his way into a job at his Local Comic Shop, Captain Blue Hen Comics in Newark, Delaware. Within two years, he was running the place. In 2001, after picking the brains of the wisest and brightest in comic retailerdom, Joe and his wife Danielle decided to buy the business. Captain Blue Hen is a three-time Eisner Spirit of Retailing finalist, a seven-time Readers’ Choice Best Comic Shop winner, and celebrated its 40th anniversary overall and 20th anniversary under Joe and Danielle’s stewardship in 2021. A member of ComicsPro, the only trade organization for direct-market comic book retailers, Joe was elected to the Board of Directors in 2019 and became Vice President in 2021. Joe works with a multitude of schools and libraries in several states. He has been a speaker at the Delaware and Maryland Librarians conference, a workshop speaker at Diamond Summits and New York Comic-con, and is a regular guest speaker at the University of Delaware for graduate study courses in Library Sciences.

Qiana Whitted is professor of English and African American Studies at the University of South Carolina. A graduate of Hampton University with a PhD from Yale University, her research and teaching focus on Black literary and cultural studies, and American comics and graphic novels. She is the author of the Eisner Award-winning book, EC Comics: Race, Shock, and Social Protest, and co-editor of the collection on Comics and the U.S. South. She also wrote the introductory essay for the Black Panther volume of the new Penguin Classics Marvel Collection and is currently editing a collection on blackness in early American comics. She is the editor of Inks: The Journal of the Comics Studies Society and chair of the International Comic Arts Forum.