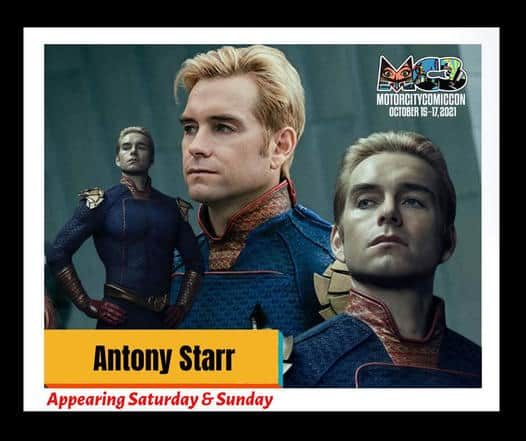 ‘The Boys’ are back in town! Well at least of them is ANTONY STARR will appear October 16-17, 2021 at Motor City Comic Con! Antony is best known for his starring role as the superhero/villain Homelander in Amazon Prime’s hit series The Boys. If you haven’t seen it yet you still have time to binge it before the show! He will be available on Saturday, October 16th and Sunday, October 17th to sign autographs ($50) and professional photo ops by Pose Photos ($60).

Antony Starr is a New Zealand actor best known for his starring role in Amazon Prime Video’s original series The Boys, which is based on the comic book series of the same name, playing the superhero Homelander. In his own country, he is best known for his dual role as twins Jethro and Van West in New Zealand’s comedy/drama Outrageous Fortune and Billy Newwood in Without a Paddle. He was the series lead, Lucas Hood, in the four season run of Banshee.

An added convenience feature this year for guests to avoid the long admission lines, will be RFID wristbands! RFID wristbands are available for purchase and mailed to homes for an additional $15 fee. Fans who purchase these RFID wristbands and have them mailed prior to the con will not have to wait in any lines before entering the convention and get a faster start to their Motor City Comic Con experience. This option allows guests to skip registration by simply putting on the wristband before entering the show.