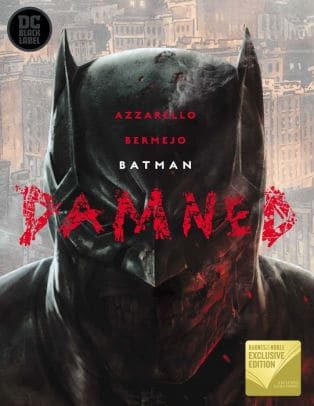 Featuring breathtaking artwork from Eisner Award winning artist Lee Bermejo, BATMAN: DAMNED is available as a collected edition from booksellers everywhere the day of the signing.

ABOUT THE BOOK:
The Joker has been murdered. His killer is a mystery. Batman is the World’s Greatest Detective. But what happens when the person he is searching for is the man staring back at him in the mirror?

With no memory of the events of the previous night, Batman is going to need some help. So who better to set him straight than John Constantine? The problem with that is as much as John loves a good mystery, he loves messing with people’s heads even more. So with John’s “help,” the pair will delve into the sordid underbelly of Gotham as they race toward the mind-blowing truth of who murdered The Joker.

The Barnes & Noble Exclusive Edition of BATMAN: DAMNED includes an exclusive lithograph and 8 bonus pages that include additional character designs and pages filled out from black & white artwork from the book.