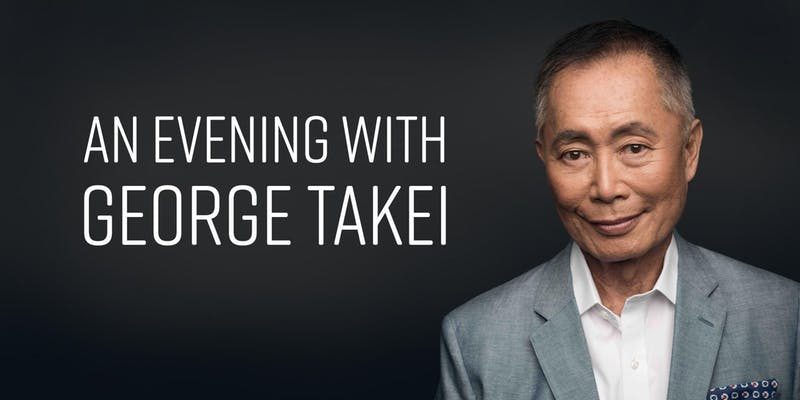 George Takei, actor, activist, and author of They Called Us Enemy, appears in conversation with Mina Kim, Evening Anchor and Friday Host of“Forum,” KQED News, at the Herbst Theatre on Tuesday, September 24, 2019 at 6:30 PM. Get tickets here…

This program is part of our Good Lit series, underwritten by the Bernard Osher Foundation.

With an acting career spanning six decades, George Takei is known around the world for his founding role in the acclaimed television series “Star Trek,” in which he played Hikaru Sulu, helmsman of the Starship Enterprise. But Takei’s story goes where few stories have gone before. From a childhood spent with his family wrongfully imprisoned in Japanese American internment camps during World War II to becoming one of the country’s leading figures in the fight for social justice, LGBTQ rights and marriage equality, Takei remains a powerful voice on issues ranging from politics to pop culture. Mashable.com named him the no. 1 most influential person on Facebook, currently with 10.4 million likes and 2.8 million followers on Twitter.

Takei hosts the AARP-produced YouTube series “Takei’s Take,” and is the subject of To Be Takei, a Jennifer M. Kroot documentary on his life and career. “Takei’s Take” explores the world of technology, trends, current events and pop culture. On his own YouTube channel, Takei and his husband Brad Takei bring viewers into their personal life in the heightened reality web series, “It Takeis Two.”

Takei made his Broadway debut in the musical, Allegiance, inspired by his true-life experience in American internment camps. Allegiance ran in New York in 2015 and 2016 and had its Los Angeles premiere in 2018. In his new graphic memoir, They Called Us Enemy, Takei revisits his haunted childhood in American concentration camps as one of 120,000 Japanese Americans imprisoned by the U.S. government during World War II. He details the forces that shaped him—and America itself—in a tale of courage, country, loyalty and love.

Come for a rare visit with an American icon about his life, his activism and his ongoing mission to ensure that, at least on Earth, very few frontiers are final.