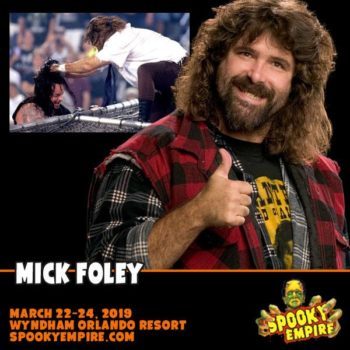 The announcements never end at Spooky Empire! We have a surprise guest addition today…MICK FOLEY returns to Orlando in just 2 short weeks!

Mick Foley will be at Spooky Empire all weekend, March 22-24! There should be no introduction needed, but for those of you not in the know…Mick Foley is a former professional wrestler, commentator, author and actor, known to some as one of the greatest wrestlers of all time. He’s wrestled under the names “Mankind”, “Dude Love” and “Cactus Jack”. He was also part of one of the sickest matches of all time, “Hell in a Cell” with “The Undertaker”.

Don’t miss this appearance, get your advance tickets today! spookyempire.com