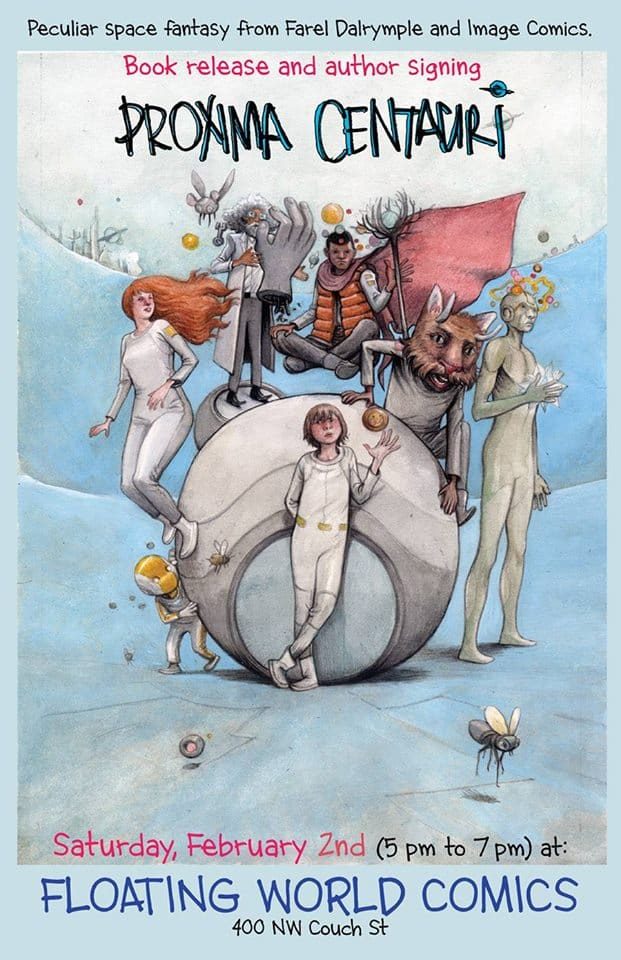 Join Farel Dalrymple at Floating World Comics on Saturday, February 2 from 5:00 – 7:00 PM to celebrate the release of his new graphic novel, Proxima Centauri.

4.243 light-years from Earth, the teenage wizard adventurer Sherwood Breadcoat is stuck in the confounding spectral zone on the manufactured dimensional sphere, Proxima Centauri, looking for escape and a way back to his brother while dealing with his confusing emotions, alien creatures, and all sorts of unknown, fantastic dangers.

Farel Dalrymple is a cartoonist residing in Portland, Oregon. He is the creator of The Wrenchies, from First Second Books is an original 304-page watercolor comic book/graphic novel. Delusional, (Adhouse, 2013) is a collection of personal work, comic short stories, illustrations, and sketches. Farel was also the artist on Omega the Unknown (Marvel Comics 2010), with writer Jonathan Lethem. His creator owned comic book, Pop Gun War was a Xeric Grant recipient and won a gold medal from The Society of Illustrators. Farel is a co-founder of the comic anthology, Meathaus and has worked on a several Illustration and cartooning projects.