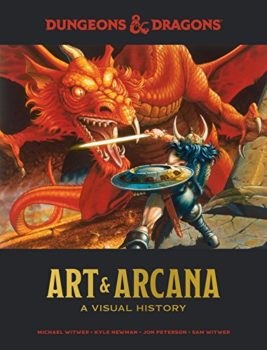 An illustrated guide to the history and evolution of the beloved role-playing game told through the paintings, sketches, illustrations, and visual ephemera behind its creation, growth, and continued popularity.

From one of the most iconic game brands in the world, this official DUNGEONS & DRAGONS illustrated history provides an unprecedented look at the visual evolution of the brand, showing its continued influence on the worlds of pop culture and fantasy. Inside the book, you’ll find more than seven hundred pieces of artwork–from each edition of the core role-playing books, supplements, and adventures; as well as Forgotten Realms and Dragonlance novels; decades of Dragon and Dungeon magazines; and classic advertisements and merchandise; plus never-before-seen sketches, large-format canvases, rare photographs, one-of-a-kind drafts, and more from the now-famous designers and artists associated with DUNGEONS & DRAGONS. The superstar author team gained unparalleled access to the archives of Wizards of the Coast and the personal collections of top collectors, as well as the designers and illustrators who created the distinctive characters, concepts, and visuals that have defined fantasy art and gameplay for generations. This is the most comprehensive collection of D&D imagery ever assembled, making this the ultimate collectible for the game’s millions of fans around the world.

Michael Witwer is the author of the critically acclaimed Empire of Imagination: Gary Gygax and the Birth of Dungeons & Dragons, a GeekDad Best Book of 2015. Michael is widely considered an expert on D&D history and has spoken on the topic at Google as part of its Google Talks series, on NPR’s All Things Considered, as well as at major book and gaming conventions such as the Boston Book Festival, Gen Con, and Origins.

Jon Peterson is a widely recognized authority on the history of games. His book Playing at the World was called “the first serious history of the development of Dungeons & Dragons” by The Village Voice. He has contributed to academic anthologies on games including Zones of Control and the forthcoming Role-playing Game Studies: Transmedia Foundations. Jon also writes for gaming and geek culture websites including BoingBoing, the Escapist, and GamaSutra, as well as his popular RPG history blog, playingattheworld.blogspot.com.

Sam Witwer is an actor whose work includes leading roles in the SyFy series Being Human, for which he was nominated for a Gemini Award, and the Star Wars Saga, where he brings various characters to life in video games, film, and television–including an Emmy nominated performance as the voice of Death Maul. He has also been featured on Once Upon a Time, Smallville, Battlestar Galactica, Stephen King’s The Mist, and Dexter. He has been an avid Dungeons & Dragons player since age 11.