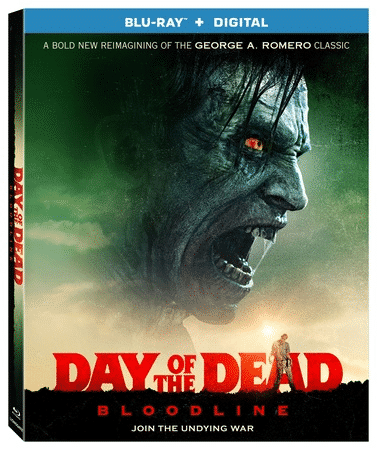 Night falls in an unnamed American city. Couples are out walking. Workers are driving home. A girl calmly rides her bicycle. And zombies are attacking. Growling. Chewing. Ripping into flesh as into a juicy orange. Blood is everywhere. A woman talks to her mom on the phone, then starts running from a zombie. Her shirt is unbuttoned, and we see her lacy beige bra.

When I saw that bra, I knew this would be a horror movie.

Day of the Dead: Bloodline is director Hèctor Hernández Vicens’s “reimagining” of the George A. Romero’s Day of the Dead (1985), his third zombie film after Night of the Living Dead (1968) and Dawn of the Dead (1978). Zoe Parker–she of the plain-sight underwire–is a med school student who prefers books to bacchanalia. Her friends persuade her to come to a party, where she sees a patient named Max who has a history of hitting on her. (She was drawing his blood and saw his forearm tattoo . . . of her name.) They are, oddly, in a room with a cadaver when Max tries to rape Zoe. Thank goodness the cadaver wakes up, gets off the table, and bites a chunk out of Max’s throat.

Five years later, the zombie apocalypse is in full flower. Zoe is the “town doctor” of a quasi-military survivor settlement. A young girl in the camp has pneumonia, and Zoe talks Lieutenant Miguel Salazar, the ranking officer, into sending her with a team to her old med school for supplies. At the surprisingly unpillaged school, she encounters Max, her would-be rapist, who clings to the underside of the humvee and rides back to the settlement.

Max, as it turns out, is only partially zombified, which I guess is how he was Rambo enough to skulk around the compound for a while before being captured. Zoe realizes his blood can fight the zombie virus (this is scarcely explained), and to everyone’s disdain, she keeps him alive while working on an antivirus. Of course he escapes. And of course the regular zombies outside the perimeter fence, whose blood is needed as a comparison to Max’s, overwhelm the efforts to collect that blood and terrorize the camp. Zombies get shot. People get eaten. Zoe succeeds at the antivirus, but what good is a cure when victims have had their flesh torn from their bones? It’s not like zombies infect people by sneezing on them. Oh well, at least she saves her boyfriend Baca and the girl who had pneumonia, which are the only ones who matter anyway.

The movie struggles to deserve the label “reimagining.” Most critics view Romero’s films as warnings of the danger of conformity, satires on consumerism, or examinations of class conflict. Nothing that highbrow is at work here. Vicens made basically the same film as Day of the Dead, with some gratuitous changes. But they are the equivalent of a paraphrase: different words, same spirit. The acting is clunky, the characters are one-dimensional, and the conflict is contrived. Max is half-zombie and so may not be functioning at a high level, but what was he trying to accomplish? Zoe rejected him when he was a human. What makes him think he can talk his way into her pants when he looks like a cross between Heath Ledger’s Joker and Trap-Jaw from Masters of the Universe?

George Romero, rest his soul (we hope–he was Father of the Zombie Film), tried to be more than a scaremeister. Day of the Dead: Bloodline has a couple of scares, nothing more. The Blu-ray includes a featurette on the making of the movie. You can probably watch this and skip the movie. Those who think the zombie genre is played out may point to this installment as proof. I wouldn’t go that far. Yet I would say that this reimagining leaves nothing to the imagination.