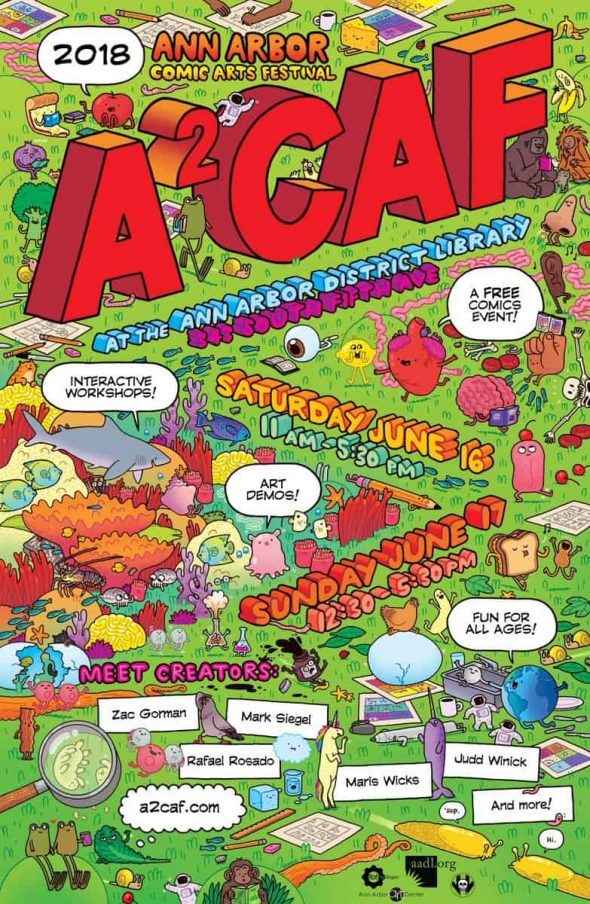 The 2018 Ann Arbor Comic Arts Festival has announced three of this year’s headline guests, each making their very first appearance at the show on Saturday, June 16th and Sunday, June 17th.

Judd Winick, author of the Hilo series, Pedro and Me: Friendship, Loss, and What I Learned, and writer of DC Comics superheroes!

Mark Siegel, author of Sailor Twain, or the Mermaid in the Hudson, artist of various children’s books including Long Night Moon and Oskar and the Eight Blessings, and creative and editorial director of First Second Books.

Maris, Mark, and Judd will be joined by over 50 additional guests–some of them old friends, some new to A2CAF; longtime comics creators and kids just starting to get their nibs wet; and all of them eager to greet you in our bustling, bubbly and bursting Artists Alley on the first floor of the Ann Arbor District Library!

So whatever kinds of comics you’re in the mood for: heroic adventure or slice of life, fantasy or funny animals, scary stories or science fiction, history or humor–and yes, once again, four different varieties of Shakespeare comics!–you’ll find them in Artists Alley at this year’s Ann Arbor Comic Arts Festival!

Zack Giallongo, Author of Broxo, Ewoks: Shadows of Endor, artist of the Stratford Zooseries, and author of Star Wars Doodles. Co-host of the Galaxy of Super Adventure show.

Meggie Ramm, creator of Stick World, I Have No Idea What I’m Doing, and Olympic Adventures.

Pranas T. Naujokaitis, writer of the Adventure Time: Ice King miniseries, writer/illustrator of Uncle Grandpa in Uncle Grandpaland, and creator of many mini-comics including the Monster Town series and the Ignatz Award nominated Laffy Meal.

Gregg Schigiel, author/illustrator of the Pix graphic novels, regular contributor to SpongeBob Comics, and host of the “Stuff Said” podcast.

Scoot McMahon, cartoonist of Sami the Samurai Squirrel, Wrapped Up, Spot on Adventure, The Mighty Super Kingz, Tales from the Con, and Aw Yeah Comics!

Jonathan Griffith, author and illustrator of 1964, 3031: An Ongoing Exploration of the Familiarly Unknown webcomic, and August & Patterson.

Tara Kurtzhals, Co-creator of featured WEBTOON Girls Have A Blogand the Knight & Beardwebcomic.

Chad Sell, creator of The Cardboard Kingdom from Knopf and Random House.

Dani Jones,  creator of children’s book Monsters vs Kittens and webcomic My Sister the Freak, and illustrator of the graphic novel PopularMMOs Presents a Hole New World.

Rob Stenzinger, co-host of the Lean Into Art Podcast, Creator of the video game This Panda Needs You, and a new comic called Two Pizza Team.

Emily Zelasko, writer and Illustrator of Snow, Old Man, Dog, and the Ocean, Phantom in the Snow, Something Something Adam, and the Piece of Cake webcomic. Illustrator for Rainbow Sprinkle Slime, Vostokapolis. Colorist for Corpse Corp.

Chris & Gin (Chris Ludden and Ginger Dee), creators of Dexter’s Digs, Presidents of the United Space, and The Brothers Grant.

Sean Dove, co-creator of BroBots at Oni Press, Colorist on Wrapped Up, and Madballs.

Zachary Lehner, artist of Junior Braves of the Apocalypse, contributing author and artist to the anthology I Want to Pet Your Werewolf.

Madeline Zuluaga, one of the Illustrators on When the Rules Aren’t Right: 7 Time Travel Tales of Activism Graphic Novel; contributor to Mine!: A Comics Collection to Benefit Planned Parenthood anthology and New Frontiers: The Many Worlds of George Takei anthology; creator of a capybara-focused illustration book called Capybara Parade.

Bruce Worden, author/illustrator of Goodnight Keith Moon; Woodstalk: 3 Days of Peace, Music, and Zombies; and the weekly pictoblog Shoppers Unknown where he finds discarded shopping lists and draw the people he imagines wrote them.

Terry Eisele, author of the three-volume graphic novel With Only Five Plums and the forthcoming Far Tune.

Courtney M Hahn, artist of Podunk, Space for Everyone, and Uni-Puppy.

Ellie Moody, creator of The Melting, How to Make Toast, Bad Guys, and more.

Bruno Hohn, creator of the comics series The Misadventures of Spenser the Ghost & Larry the Muffin.

Theresa Dunn, author/illustrator of The Tale of Sir Stinky and Not All Pirates Have Hook Hands.

Matthew New, writer/artist for Billy Johnson and his Duck are Explorers.

Ali Cantarella, creator of The Hasty Pastry graphic novel, illustrator on Monkey and Dragon in the Golden Hour children’s book.

Charles Brubaker, creator of Ask a Cat and The Fuzzy Princess.

Brett R. Pinson, creator of Boomtown Scabs, The Adventures of Carl, The Expendables.