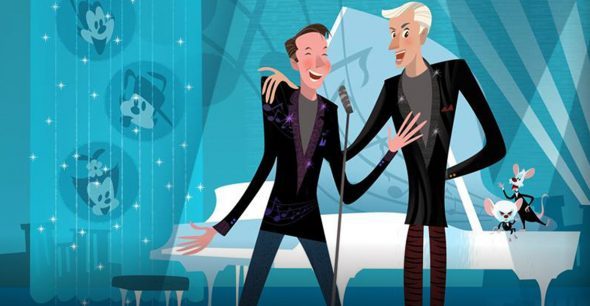 It’s time for Animaniacs! The beloved show turns 25, and SF Sketchfest is proud to celebrate it with an evening of stories, songs and general tomfoolery with three of the massive talents behind the show: Rob Paulsen (Yakko, Pinky, Dr. Scratchansniff), Maurice LaMarche (The Brain), and Randy Rogel, the man responsible for the amazing wordplay and music in the show, appear at the Brava Theater Center on Friday January 12, 2018 at 7:30 PM.

Maurice LaMarche:
Maurice LaMarche is an Emmy Award winning Canadian voice actor and former stand up comedian. He is best known for his voicework in Futurama as Kif Kroker, as Egon Spengler in The Real Ghostbusters, Verminous Skumm and Duke Nukem in Captain Planet and the Planeteers, Big Bob Pataki in Hey Arnold!, Dizzy Devil in Tiny Toons, The Brain in Animaniacs and Pinky and The Brain, and his portrayal of Mr. Freeze in Batman: Arkham City. His extensive resumes also includes voice work on The Critic, GI Joe, Freakazoid!, The Tick, Taz-Mania, Talespin, The Littler Mermaid, King of the Hill, Sonic Underground, Disney’s House of Mouse, Mickey Mouse Works, and Inspector Gadget. He also dubbed the voice of Orson Welles over Vincent D’Onofrio’s on-camera performance in Ed Wood. Follow him on twitter: @mauricelamarche.

Rob Paulsen
One of the most acclaimed and in-demand voice actors out there, with over 2,000 animated half-hours to his credit and 1000 commercial spots, Rob Paulsen is familiar to many as the voice of Pinky from Pinky and the Brain (for which he won a Daytime Emmy in 1999 for Outstanding Performer in an Animated Program, and back to back Annie awards in 1997 and 1998); Yakko and Dr. Scratch ‘n’ Sniff from Animaniacs; Arthur from The Tick; Raphael from Teenage Mutant Ninja Turtles; Jack Fenton in Danny Phantom; Carl Wheezer in Jimmy Neutron: Boy Genius; the title role in Mighty Max; Bobble in the Tinkerbell series; and the title role in The Mask. On camera, he’s appeared in the films Body Double, Stewardess School, Eyes of Fire, The Perfect Match and Warlocked. TV work includes MacGyver and St. Elsewhere. Rob’s new weekly podcast, Talkin’ Toons with Rob Paulsen, is available on iTunes. Check out his website at www.robpaulsenlive.com

Randy Rogel
Randy has won three Emmy Awards (nominated for ten), a Peabody Award, two Annie Awards, three Leo Awards, and the Ovation Award. He recently co-wrote the hit song “Poisonous Love” for Kristen Chenoweth with John Powell for the major motion picture “Rio 2.” He was show-runner for the animated series “1001 Nights” and won Leo awards for Writing and Best Animated Series. At Disney, Randy wrote songs and scripts for the animated movies “Peter Pan — Return to Neverland,” “Cinderella II,” “Cinderella III,” “Winnie The Pooh,” “Around the World in Eighty Days,” “The Three Musketeers,” and “101 Dalmations II.” Randy spent nine years on staff at Warner Bros. Animation where he began as an original writer on the “Batman” series and then joined the staff of Steven Spielberg’s “Animaniacs,” for which wrote most of the songs and many of the scripts. Randy is a West Point graduate with ten years service as an officer in the combat arms. He has a B.S. in Engineering from the academy and a Masters Degree in International Relations from Boston University.