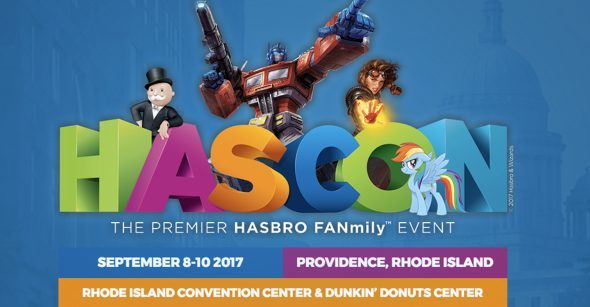 Joining the previously announced all-star line-up is James Gunn (writer and director, GUARDIANS OF THE GALAXY VOL. 1 and 2) and musician Stan Bush (singer, “The Touch” from TRANSFORMERS: THE MOVIE). HASCON will also feature a headlining performance and meet and greet from Multi-Platinum GRAMMY® Award-Winning singer-songwriter Daya and an interactive sing-along with Sesame Street’s beloved Muppets Elmo and Abby Cadabby.

This unique event will bring Hasbro’s most iconic brands to life like never before, including TRANSFORMERS, MY LITTLE PONY, NERF, MAGIC: THE GATHERING, PLAY-DOH, MONOPOLY and G.I. JOE and exceptional partner brands such as BEYBLADE, DREAMWORKS TROLLS and SESAME STREET. Fans will get a peek behind the Hasbro curtain during the three days filled with exciting first-look previews and panels from Hasbro’s biggest television and movie series, including Hasbro’s TRANSFORMERS: RESCUE BOTS, LITTLEST PET SHOP and MY LITTLE PONY: FRIENDSHIP IS MAGIC as seen on Hasbro’s joint-venture television network Discovery Family.

In addition, there will be activities inspired by several iconic Disney properties, including Disney Princess, Frozen, Elena of Avalor, Moana and Descendants 2, as well as Star Wars and Marvel’s Avengers, Spider-Man and Guardians of the Galaxy. From movie props and costumes on display, to hands-on fun through art tutorials and more, these areas will be can’t-miss destinations during the show.

Just unveiled HASCON VIP packages will offer fans access to all General Admission activities, as well as special VIP 1 hour early access to the show floor to shop for a chance to buy HASCON exclusive product from My Little Pony, Transformers, Dungeons and Dragons as well as multi-convention exclusives from Star Wars, Marvel and Magic The Gathering.* VIP’s will also receive a Hasbro goodie bag, access to the VIP lounge and an exclusive behind the scenes tour of Hasbro headquarters, in addition to one of the following exclusive events:

General Admission ticketholders can also purchase special access to select HASCON VIP events as “ticket add-ons” through the HASCON website. These “add ons” include the above events as well as a special meet and greet with the Dudes, which includes an exclusive sneak peek of the Dude Perfect signature Bow video before it’s revealed, an autographed NERF Dude Perfect football, selfies and more!

To purchase General Admission and VIP tickets, view complete package details and stay up to date on all the latest information on HASCON 2017, please visit hascon.hasbro.com

STAR WARS and related properties are trademarks and/or copyrights, in the United States and other countries, of Lucasfilm Ltd. and/or its affiliates. © & TM Lucasfilm Ltd.
© Hiro Morita, BBBProject, TV TOKYO. © 2017 Sesame Workshop. All Rights Reserved.

Hasbro to host its first convention…HASCON!