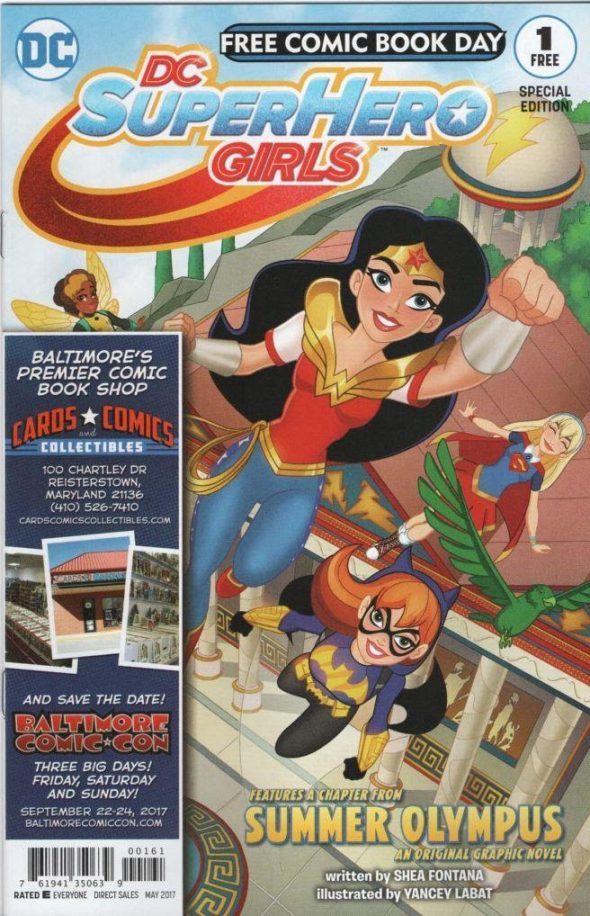 The full-day event kicks off with an awesome line-up of creators appearing at the store! Craig Rousseau, Todd Dezago, Steve Conley, and Rich Woodall will be all signing autographs at the store throughout the day. In addition, Cards, Comics & Collectibles is featuring a store-exclusive cover for DC’s FCBD SuperHero Girls issue!

Craig Rousseau has spent his career as an artist working on numerous noteworthy titles and runs. He has spent time on DC Comics’ Batman Beyond, Harley Quinn, and Impulse, Marvel’s Captain America & the Korvac Saga, Spider-Man Loves Mary Jane Season 2, and Iron Man & the Iron Wars, and he can be seen lately working on DC Comics’ Batman ’66, Image Comics’ Perhapanauts: Danger Down Under, and Dynamite Entertainment’s Pathfinder: Goblins!

Comics writer Todd Dezago has been a noteworthy contributor to Image, DC, and Marvel Comics. In addition to working on such titles as Sensational Spider-Man, Super Hero Squad, and Marvel Adventures at Marvel Comics and Impulse, Teen Titans, and Young Justice at DC Comics, Dezago’s creator-owned titles Tellos and Perhapanauts, both published through Image Comics, have garnered much attention and kudos.

Long-time friend of the show, Harvey and Eisner Award nominee, and guest since our inception in 2000 (!), artist and writer Steve Conley has contributed to numerous comic titles, both printed and online. His Astounding Space Thrills was self-published, published by Image Comics, and collected as a trade paperback by IDW. He has been featured in titles such as JLA-Z from DC Comics, Star Trek: Year Four from IDW, and Michael Chabon’s Amazing Adventures of the Escapist from Dark Horse Comics. His creator-owned Bloop, is available through his online store in print or soft copy editions, and you can read his webcomic, The Middle Age, on his website.

“Free Comic Book Day is a wonderful event,” said Marc Nathan, owner of Cards, Comics & Collectibles. “We get to see old friends, make new ones, and show people new to the hobby why comics is such a fantastic medium for storytelling.”

Besides giving away free comic books, the store will have free Baltimore Comic-Con t-shirts to give away (while supplies last!), and will offer 50% off modern back issue bins, trade paperbacks, hardcovers, and manga*.