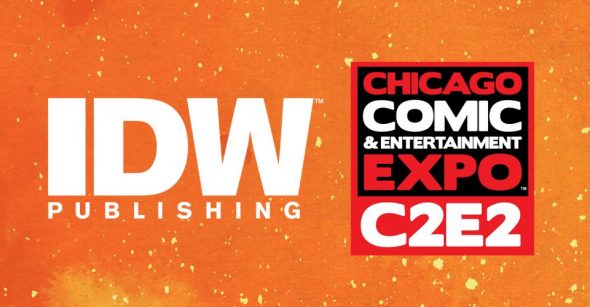 This weekend from April 21st to April 23rd join IDW Publishing at McCormick Place in Chicago for the annual fan-favorite convention, C2E2! Marking the first year of exhibiting at the show IDW is bringing big names and special surprises to the fans in Chicago including cast and crew from the hit SyFy TV show Wynonna Earp. Located at Booth #609, IDW can be found all weekend long stocked with must-have books and signings that you won’t want to miss!

Make the IDW booth your first stop on the show floor and get our newest convention variants and a deluxe Wynonna Earp pack including signed comics, digital download codes, and more!

Mark your calendars with our signing schedule now so you don’t miss any of the action!

Additionally, we’ve teamed up with the CBLDF to host two special signings for the very special anthology collection, Love is Love on Friday, April 21st. Head to booth #409 to grab a copy and get it signed!

All that, and be sure to come by our panels throughout the weekend to hear all of the biggest news first!

Title: The Latest and Greatest from IDW
Description: Join IDW’s Greg Goldstein and Dirk Wood to be among the first to find out about IDW’s next big event! Surprise guests, prizes, and an open Q&A make this one panel you won’t want to miss!
Date: 4/21/2017
Time: 4:15 PM – 5:15 PM
Location: S405a

Title: Jaws Will Drop, Sides Will Ache… SUPER WEIRD HEROES!
Description: A hilarious multimedia show of the kookiest, kraziest most bizarro leotard-clad bad-guy bashers of the Golden Age! The Hand (a giant hand!), Madam Fatale (an old lady cross dresser!), Kangaroo Man (yes!) and tons more are held up to reverence and ridicule. Based on the best selling book, “Super Weird Heroes”, the stand-up comedy presentation is by the former Creative Director of the Muppets and now editor of IDW/Yoe Books, Craig Yoe.
Date: 4/23/2017
Time: 2:30 PM – 3:30 PM
Location: S405a

IDW Games’ diverse line-up includes the international phenomenon Machi Koro, as well as hit licensed games such as X-Files, Back to the Future, The Godfather, and TMNT.

IDW Entertainment serves as the worldwide distributor of Wynonna Earp airing on the Syfy Channel in the U.S. and is producing BBC America’s Dirk Gently, based on the bestseller by Douglas Adams starring Elijah Wood and Samuel Barnett.