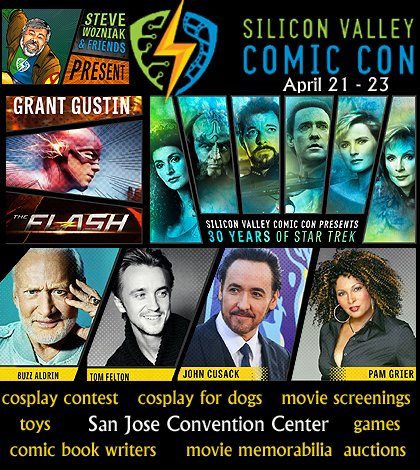 Silicon Valley Comic Con (SVCC), Steve Wozniak’s pop culture and technology expo, has announced that Grant Gustin, star of the hit television series “The Flash,”and Tom Felton, Draco Malfoy from the Harry Potter films and supervillain Doctor Alchemy on “The Flash,” have been added to the show’s guest lineup. This marks Grant’s first ever appearance at any Comic Con. Fans will get a chance to meet Grant and Tom for photos, autographs and a special Q&A session. The second annual SVCC will be hosted at the San Jose Convention Center in San Jose, CA the weekend of April 21-23.

As  Barry Allen / The Flash in the CW network television hit series “The Flash,” Grant has also appeared in crossover episodes with “Arrow,” “Supergirl” and “Legends of Tomorrow.” Grant is also known for his role as Sebastian Smythe on the FOX network television series “Glee” and for playing Campbell Price on “90210” (CW TV show). This month, he will join former “Glee” castmates Melissa Benoist and Darren Criss for a special musical crossover of “The Flash” and “Supergirl.”

Best known as Draco Malfoy from the Harry Potter films, Tom Felton left the magical world to go on to star in “Rise of the Planet of the Apes,” “Belle,” “The Disappeared, “Night Wolf,” “The Apparition,” “In Secret” and more. He is now a series regular on “The Flash,” where he plays Julian Dorn, a CSI at the Central City Police Department with suspicions about Barry Allen – otherwise known as Doctor Alchemy, the acolyte of speed god Savitar, this season’s super villains.

Grant and Tom join an already star-studded lineup of high-profile guests at SVCC 2017, including recently announced guests John Cusack of “Being John Malkovich,” “High Fidelity” and “Sixteen Candles;” Gina Torres of “Suits” and “Firefly;” and Billy Boyd, who played Peregrin “Pippin” Took in Peter Jackson’s epic film trilogy “The Lord of the Rings.” Additional guest highlights who were previously announced include:

●  The 30th anniversary cast reunion of “Star Trek: The Next Generation”

●  Buzz Aldrin, Apollo 11 Astronaut and one of the first people to walk on the moon

●  Steven Yeun of “The Walking Dead”

For the latest news and updates on additional celebrity guests, exhibitors, panels and events, follow @SVComicCon on Twitter.