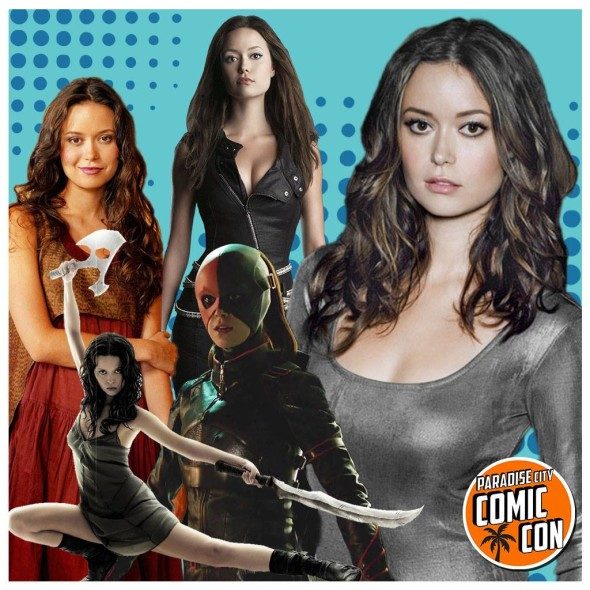 Summer Glau has just been announced as a guest for PARADISE CITY COMIC CON on December 9, 10, & 11 at The Greater Fort Lauderdale Convention Center

Summer Glau is best known for for her iconic roles as River Tam in Joss Whedon’s TV series Firefly and the feature film, Serenity and Cameron Philips in Terminator: The Sarah Connor Chronicles. She has recently had a featured role on The CW’s Arrow as Isabel (Ravager). Use PROMO CODE: “SPIKE” to save $10 OFF Three Day Weekend Passes and PROMO CODE: “RIVER” to save $5 OFF single day and 2 Day Tickets! These promo codes are valid until Monday Oct. 31 @ 11:59pm. Over 100 celebrity guests, voice actors, comic book creators, entertainment guests, and cosplay stars will be in attendance.

Summer Glau got her start in Joss Whedon’s much acclaimed TV series Angel playing a cursed Prima Ballerina in the 2002 episode “Waiting in the wings”. Contributing to her Sci Fi credits were roles in USA’s The 4400 as Tess, Joss Whedon’s Dollhouse as Echo’s long lost nemesis, Bennet Halverson, NBC’s The Cape as Orwell, an investigative blogger who teams up with Vince/The Cape in order to fight crime and restore justice, and guest appearances on Alphas as Skylar. Summer has also starred in the the films Deadly Honeymoon, and The Legend of Hells Gate: An America Conspiracy. She has made guest appearances on TV in The Big Bang Theory, Chuck, Hawaii 5-0, and NTSF:SD:SUV.

The guest list is growing weekly, and some of the highlights include:

One Drops and One Returns for Spooky Empire