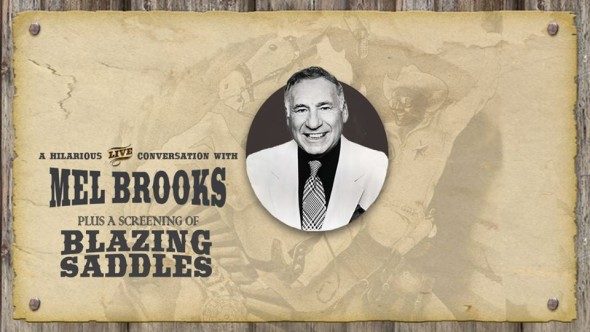 Join the incomparable Mel Brooks live on stage for an exclusive, inside look at his storied career, and the making of the legendary and groundbreaking movie Blazing Saddles on Thursday, September 1, 2016 at 7:30pm. This outrageous masterpiece, considered one of the top comedy films of all time, will be presented on the big screen followed by a conversation and audience Q&A with Mel Brooks himself.

Mel Brooks, director, producer, writer and actor, is in an elite group as one of the few entertainers to earn all four major entertainment prizes – a Tony, Emmy, Grammy and Oscar. His career began in television writing for Your Show of Shows and together with Buck Henry creating the long-running TV series “Get Smart.” He then teamed up with Carl Reiner to write and perform the Grammy-winning “2000 Year Old Man” comedy albums and books. Brooks won his first Oscar in 1964 for writing and narrating the animated short The Critic and his second for the screenplay of his first feature film, The Producers in 1968. Many hit comedy films followed including The Twelve Chairs, Blazing Saddles, Young Frankenstein, Silent Movie, High Anxiety, History of the World Part I, To Be or Not to Be, Spaceballs, Life Stinks, Robin Hood: Men in Tights and Dracula: Dead and Loving It. His film company, Brooksfilms Limited, also produced critically-acclaimed films such as The Elephant Man, The Fly, Frances, My Favorite Year and 84 Charing Cross Road.