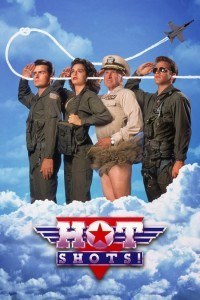 Yes, it’s been 30 years since “Top Gun.” But never mind that. It’s been 25 years since the hysterical parody “Hot Shots!” debuted and we’re celebrating!

Legendary comedy filmmakers Jim Abrahams and Pat Proft will be on hand for a special screening and Q&A at the Castro Theatre on Saturday, January 9, 2016 at 7:00 PM. Director and co-writer Jim Abrahams is 1/3 of the infamous ZAZ trio, alongside David Zucker and Jerry Zucker, who created the comedies “Airplane!, “The Naked Gun,” “Kentucky Fried Movie” and “Top Secret.” Co-writer Pat Proft co-wrote the “Naked Gun” trilogy as well as the screenplays for “Police Academy” and “Bachelor Party.”