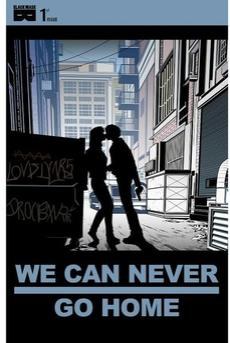 Writer Matthew Rosenberg will sign copies of the first issue of We Can Never Go Home (Forbidden Planet Sid & Nancy variant) at Forbidden Planet on Wednesday 3rd June at 6:00pm.

A well worn mixtape, a stolen convertible, a duffel bag full of cash, a fully loaded .45, and super-powers.

Seventeen and on the run is the only way to see America right. Teenage outcast Duncan and popular girl Madison share a secret – they can do things other people can’t. But their abilities take them down a dangerous path. After a deadly accident they are left with no choice: leave home and never come back. We Can Never Go Home is a new chance to fall in love with the doomed misfits who need to run away to find themselves.

Matthew Rosenberg grew up in the punk and hardcore scenes of New York City where he learned a lot of things about a lot of things. Now he writes comics such as 12 Reasons To Die with RZA & Ghostface Killah from the Wu-Tang Clan, Menu for tripcity.net, and We Can Never Go Home for Black Mask Studios. He is the co-writer on the new Ghostface Killah LP 36 Seasons. He is also writing Secret Wars Journal #1 and an upcoming S.H.I.E.L.D. one shot, both for Marvel, as well as Our Work Fills The Pews for Black Mask Studios. He is one half of the writing collective known as Ashcan Press. He likes comic books, ocean creatures, Whit Stillman movies, and chocolate milk way more than he should.