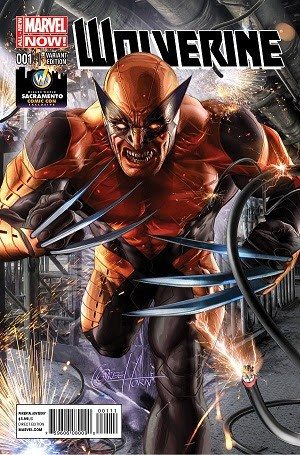 NEW YORK, January 16, 2014 – Marvel Comics and Wizard World, Inc. (OTCBB: WIZD) today revealed the latest edition of its 2014 series of exclusive variant covers of the best Marvel titles with the unveiling of Wolverine #1, drawn by prolific cover artist Greg Horn. VIP attendees at the inaugural Wizard World Sacramento Comic Con, March 7-9 at the Sacramento Convention Center, will receive a free copy of the limited-edition book at registration. The exclusive will be limited to 3,000 copies.

Horn is scheduled to be on site at the event to sign copies (autograph fees may apply). Leading professional comic grader CGC will also be on hand to accept books for grading and Signature Series.

“Greg Horn’s bombastic variant cover will hit Wizard attendees like a freight train made of pure Adamantium, but it’s just a hint of what’s in store for Marvel readers,” said David Gabriel, Marvel Comics’ SVP of Sales.  “Brace yourself for one of the most anticipated, controversial and inevitable stories in the long, hard saga of Logan’s life.”

Horn is best known for his artwork on Marvel titles Elektra, Emma Frost, and She-Hulk. He was also the regular cover artist on the acclaimed series Ms. Marvel by Brian Reed. His work in comic books has opened up opportunities on high profile projects in advertising, video games, magazine covers, editorial, boardgames, and novels.

“Greg’s work is absolutely amazing and his Wolverine pops from the cover in an extraordinary way.” says John Macaluso, Wizard World CEO.  “We are once again thrilled to bring our fans the best books with the top artists from the Marvel universe. As always, we love having Greg as a Special Guest at our show.”

Wizard World Comic Con is also the place for cosplay, with fans young and old showing off their best costumes throughout the event.  Fans dressed as every imaginable character – and some never before dreamed –  will roam the convention floor, often stopping by the Show Stage, the ideal place to see and be seen.

For more on the 2014 Wizard World Sacramento Comic Con, go to http://www.wizardworld.com/home-sacramento.html.