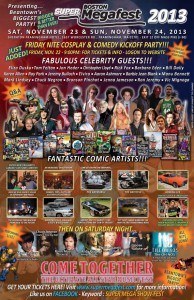 Comic, Movie and TV fans will be thrilled with the rare appearance of  CHRISTOPHER LLOYD – Doc Brown from Back to  the Future. TOM FELTON – best known for playing the role of Draco Malfoy in the Harry Potter film series. ELIZA DUSHKU – Known for her television roles including recurring appearances as Faith on Buffy the Vampire Slayer and its spinoff series Angel. JON HEDER – Napolean Dynamite! BARBARA EDEN and BILL DAILY – the sitcom I Dream of Jeannie! MANU BENNETT – Sparticus, The Hobbit and Arrow. RAY PARK- Darth Maul and Snake Eyes plus much more! KAREN ALLEN is best known for her role as Marion Ravenwood in Raiders of the Lost Ark and Indiana Jones and the Kingdom of the Crystal Skull. JEREMY BULLOCH – who starred as Boba Fett in Star Wars! JOSH SUSSMAN – current role as Jacob Ben Israel on the smash hit Glee! BRONSON PINCHOT – Balki Bartokomous on the ABC sitcom Perfect Strangers! AARON ASHMORE – best known for his roles in American TV shows, as Jimmy Olsen in Smallville and as Steve Jinks in Warehouse 13 plus much more. LARRY KENNY – voiced Lion-O of the Thundercats throughout the mid eighties! ELVIRA – Mistress of the Dark! LARRY STORCH – Corporal Agarn on the TV series F-Troop! VIC MIGNOGNA – voice actor and musician best known for his work for ADV Films/Seraphim Digital, Funimation Entertainment/OkraTron 5000, and Viz Media/Studiopolis plus much more! RON MOSS – recognized for his role of 25 years portraying Ridge Forrester on “The Bold And The Beautiful”! FRANK AVRUCH – Boston’s own Bozo the Clown! CARROL SPINNEY- original one and only for playing Big Bird and Oscar the Grouch on Sesame Street! MIA ST JOHN – 5x World Boxing Champion and Playboy Cover Model plus much more! Many other guests to be announced!
Wrestling guests include SGT SLAUGHTER and KELLY KELLY! Many other guests to be announced!

Comic artists include ETHAN VAN SCIVER – best known for illustrating a number of titles including Green Lantern, Superman/Batman, New X-Men, and The Flash: Rebirth. AL PLASTINO – best known as one of the most prolific Superman artists of the 1950s! PAUL RYAN – worked extensively for Marvel Comics and DC Comics on a number of super-hero comics including DP7, Fantastic Four, Spiderman, Batman, Flash, Superman and the Phantom plus much more! JOHN HEBERT- X-Men Adventures, Punisher, Deathlok and current Captain Action artist! GREG LAROCQUE – Spider-man, The Avengers, Justice League, Legion of Super-Heroes, & the Flash among many more! JOSE DELBO – main artist on Wonder Woman plus much, much more! HANNIBAL KING – former Magic: The Gathering artist for Wizards of the Coast and worked on comics ranging from Grendel for old Comico to Marvel’s Excaliber to DC’s Green Arrow. JAMAL IGLE – Green Lantern, G.I. Joe, Martian Manhunter and Supergirl plus much more!

The stars will be signing autographs and doing Q & A sessions with fans throughout the day. Professional photos with most celebrities will be available on site! There will also be an incredible dealers room chock full of the hottest collectibles, gifts, toys, comics, movie posters, and trading cards from the 1960s to today!

Start the Megafest on Friday night, Nov 22nd, with the SUPER MEGAFEST COMEDY KICKOFF PARTY featuring 3 top comedians! Surprise celebrity guests will mix and mingle! Every attendee will be entered into a free raffle with awesome prizes and those in full costume will receive a free Super Megafest T-Shirt! A cash bar will be available. Doors open at 8 PM and showtime is 9 PM until midnight! Start the weekend off with a memorable fun-filled night!

The COME TOGETHER MEGA MUSIC FEST celebrates the magical music of some of your favorite artists! Featuring CHUCK NEGRON, formerly of Three Dog Night, MARK LINDSAY, Niki Luparelli and the Gold Diggers and Loose Salute who will feature the works of Michael Nesmith! Showtime is 7:30 PM to Midnight on Saturday, November 23rd!