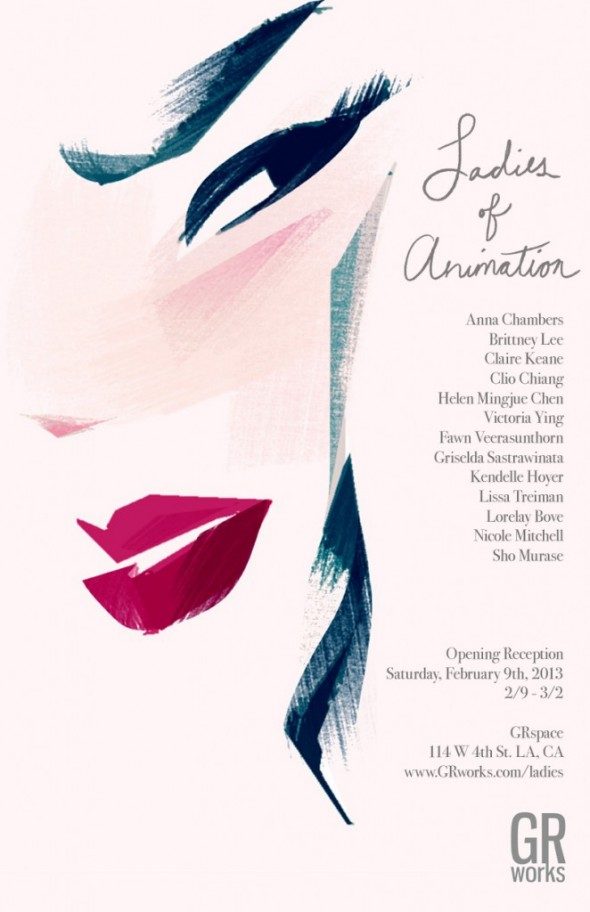 Gennie Rim, former artistic manager at Pixar and Disney, picks up her ongoing series centered on the art of animation with a new exhibit, “Ladies of Animation,” underlining the personal work of female artists from major studios including Disney, Pixar, and Dreamworks. The Opening Reception will be held on Saturday, February 9th from 6 – 10 p.m at GRspace (114 W. 4th St. Los Angeles, CA 90013). The show runs through March 2nd, 2013.

The women’s contributions span many disciplines within the world of animation from the design of feature characters to story and visual development in films such as Tangled, Wreck-It Ralph, Frankenweenie, and Paperman. The reach of their work extends beyond the studios into the arenas of toy design, graphic novels and advertising.

Of these artists, Rim says, “All of these women are world-class talent, and their personal work should be seen and recognized within the community of animation, and also within the world of fine art.”

A portion of proceeds will be used to support GRworks’ free monthly art workshop for kids — Rim’s simultaneous effort to foster interest and support for youth arts in Los Angeles. The next workshop, taught by animation artists, is scheduled for Saturday, February 15th from 1 – 3 p.m. at GRspace. For more information, please email info@GRworks.com.

Founded by animation professional Gennie Rim, GRworks was conceived in 2012 to bridge the gap between the creativity in commercial animation and fine art. Integral to the vision and philosophy of GRworks is the desire to create a space for highly talented production artists to pursue and exhibit personal works to the fine art and contemporary art communities. GRworks-curated shows have showcased many of the animation industry’s top talent. Rim brings more than 15 years of experience in animation and film, working at such industry titans as Disney and Pixar.

CA – The Artist Within Signing