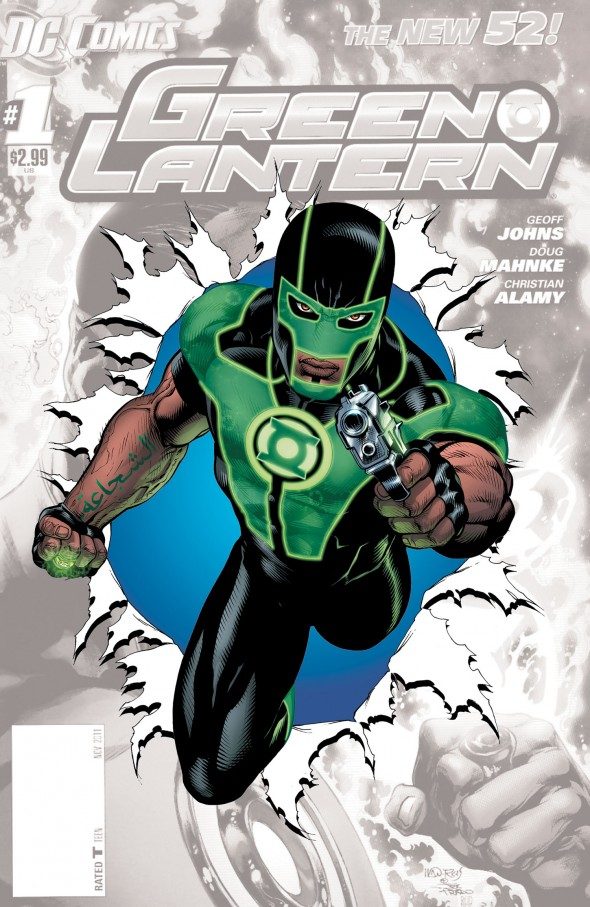 On Sept. 7-8, fans may meet Baz’s creator, Geoff Johns (left) – a Lebanese American who grew up in metro Detroit, studied at Michigan State University, and is now chief creative officer of DC Entertainment – at a pair of public events in Dearborn. The events are presented by the Arab American National Museum (AANM) in partnership with its East Downtown Dearborn neighbor, Green Brain Comics.

On Saturday, Sept. 8, Johns will meet with area youth to discuss the creation of superhero characters during an invitation-only workshop being held at the AANM, 13624 Michigan Ave. Then, from 4-6 p.m. Johns delivers a presentation on his career and characters in the Lower Level Auditorium at the AANM.

The presentation is free; seating is first come, first served. There will be no opportunity for autographs at this event.

From 5-7 p.m. Friday, Sept. 7, Johns will appear at Green Brain Comics, 13210 Michigan Ave., for a special signing to commemorate the release of Green Lantern #0 featuring Baz, who is expected to be a key figure in the upcoming Green Lantern crossover Rise of the Third Army.

Purchase of Green Lantern #0 from Green Brain Comics is required for attendance at the Green Brain event. There is a limit of two items signed per person.

Johns was born in Detroit, raised in Grosse Pointe and studied media arts, screenwriting, film production and film theory at Michigan State University. After moving to Los Angeles, he worked as an intern and later an assistant for film director Richard Donner, whose credits include Superman: The Movie, Lethal Weapon 4, and Conspiracy Theory.

After acclaimed runs on The Flash, Teen Titans, and the best-selling Infinite Crisis miniseries, Johns co-wrote a run on Action Comics with his mentor Donner. In 2006, he co-wrote 52, an ambitious weekly comic book series set in real time, with Grant Morrison, Greg Rucka and Mark Waid. Johns has also written for various other media, including the acclaimed “Legion” episode of Smallville and the fourth season of Robot Chicken. He is writing the story of the DC Universe Online massive multiplayer action game from Sony Online Entertainment LLC and joined DC Entertainment as its Chief Creative Officer in 2010.