LOS ANGELES, Calif., July 19, 2010 – Comic-Con International in San Diego is days away and Top Cow Productions, Inc. is excited you’ll be spending time with us. Below are several creators who are just as thrilled that you’ll be making a stop at the Top Cow Booth #2629:

PLEASE NOTE: All dates/times are subject to change. Sketch tickets will be available at the beginning of each day of the show. Sketch tickets are limited one per fan per day. Fans must be present at the appointed signing time to redeem their sketch ticket. Not all artists appearing at the Top Cow booth will offer free sketches and fans should inquire at the booth on the morning they plan to get a sketch for availability.

Attendees of the convention have a chance to grab the following exclusives at the Top Cow booth #2629: 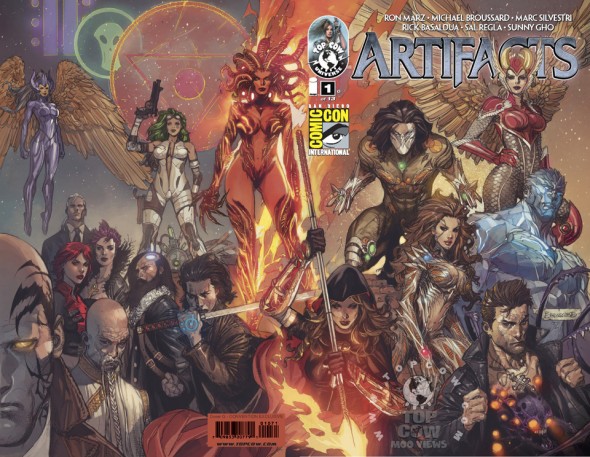 Thirteen mystical Artifacts, including the Witchblade, the Darkness and others, guide the fate of the Top Cow Universe. For centuries, it’s been whispered that bringing together all 13 Artifacts would herald mankind’s destruction. But a mysterious figure has been manipulating events, laying plans to put Armageddon into motion. The final phase begins here, with the abduction of Hope, the daughter of Sara Pezzini and Jackie Estacado. What ensues will remake the entirety of the Top Cow Universe, from the Witchblade and the Darkness, to the Angelus, Magdalena, and countless others. Artifacts #1 is the perfect place for faithful readers to see their loyalty pay off, and for new readers to experience the Top Cow Universe. And this exquisite variant cover is the perfect way to commemorate a trip to Comic-Con International. 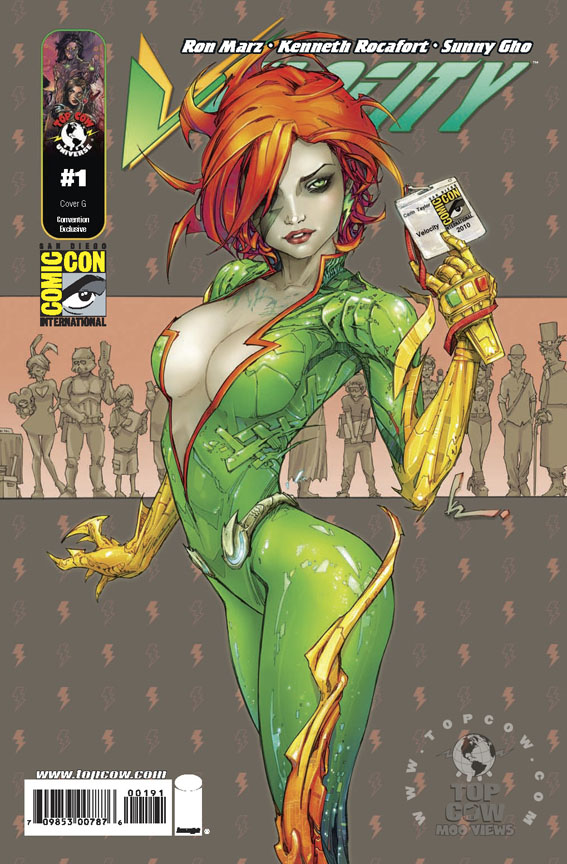 Carin Taylor is the fastest woman in the world. At least, she’d better be if she wants to save her own life and the lives of her Cyberforce teammates. When a former Cyberdata scientist — and test subject — seeks revenge against the members of Cyberforce, only Velocity can save her friends before the clock literally runs out. Bringing together writer Ron Marz (Witchblade, Angelus) and artist Kenneth Rocafort (Cyberforce/Hunter-Killer) for the first time. This fun-filled variant cover conveys Carin’s own sense of whimsy and snappy wit; and like Velocity herself, these covers will soon be gone!

A new armor for Jackie Estacado, the bearer of The Darkness, and a new beginning for Ariel Chylde, the girl who can become creatures from her nightmares! Jackie intercepts a physic plea for help, and frees Ariel from a self imposed, seven-year exile. But what happens when these fan favorite monster makers encounter a new threat that can create anything? Find out this Christmas, when things get dark! Guest starring Witchblade! Created especially for Comic-Con International, Randy and Sarah Queen present this stunning wraparound cover with a virgin front cover showcasing The Darkness and Darkchylde.

PROMO:  Attendees can purchase all 3 single-issue SDCC variant covers for the price of $30 (save $5). 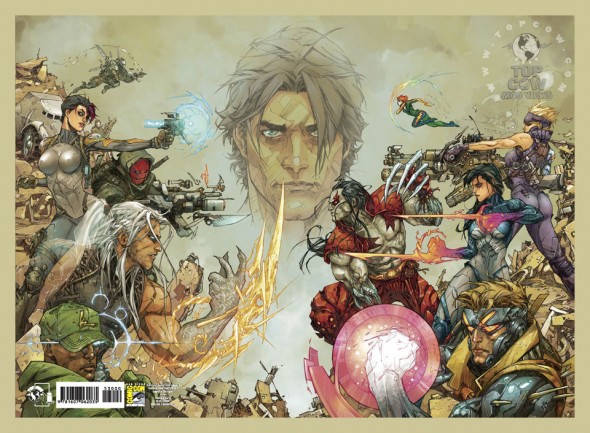 Two of Top Cow’s top teams return! Fan favorite writer Mark Waid (Irredeemable, Amazing Spider-Man) and artist Kenneth Rocafort (Madame Mirage) weave a tale of conspiracy, high-octane action, and next-gen technology in a crossover with consequences. The members of Cyberforce and the Hunter-Killer squad must team up to stop Cyberdata and Morningstar from taking control of the world’s information networks with the Jettâ„¢. Don’t miss the opportunity to pick up this extremely limited hard cover edition and get it signed by both Waid and Rocafort!

Produced by Milo Ventimiglia and DiVide Pictures!
The lives of Aaron and Farris, two young and completely different men, are turned upside down when they discover an animalistic and uncontrollable rage living inside them. Meanwhile, two mysterious organizations seek them out for their newfound strength and power for their own purposes. But what good is strength and power when you can’t tell friend from foe? Don’t miss the opportunity to pick up this extremely limited hard cover edition and get it signed by the entire creative team!

Fans who are unable to attend the show can still purchase the exclusives at a later date online at www.thetopcowstore.com, while supplies last, starting in September.  However, there is a limited number of each item, so fans are encouraged to visit the Top Cow booth #2629 early to purchase their SDCC exclusives.

BE AMONG THE FIRST TO START THE ARTIFACTS JOURNEY

LOS ANGELES, Calif., July 12, 2010 – Top Cow Productions, Inc.’s race to Artifacts will include a stop at this year’s Comic-Con International in San Diego, California, the world’s biggest and most exciting popular convention, from July 22nd – 25th.

Top Cow will once again storm into the convention and set up shop at booth #2629.  Among the goods to prepare attendees of CCI 2010 for the race to Artifacts will be exclusives, preview books, free goodies, variant comics and trade paperbacks, including free copies of Artifacts #0 as well as other comics, posters and bookmarks (while supplies last).

Attendees are invited to join Marc Silvestri (Dark Avengers/Uncanny X-Men: Utopia), President Matt Hawkins, and Publisher Filip Sablik for an exciting and lively multimedia presentation about Top Cow’s plans for 2010 and 2011 in comics, film, television and much more. Be the first to hear announcements and updates on film projects including Witchblade, Magdalena, Alibi, Wanted, and The A-Team. Plus announcements on new comic projects with creators including Ron Marz (Artifacts), Jeff Katz (American Original, Freddy vs. Jason), Phil Hester (The Darkness) plus surprise guest directors, screenwriters, producers and more!  The panel will be featured in room 9 from 1:30-2:30pm under the title Top Cow: “We Create” Multimedia, on Saturday, July 24th.

The schedule for signings as well as portfolio reviews at Top Cow booth #2629 will be released at a later date and will be available online at www.topcow.com as well as at the booth at the start of each day.

Fans should note that because of anticipated crowding issues; artists appearing at the Top Cow booth will only be able to do a limited amount of free sketches per sitting.  Sketch tickets will be available at the beginning of each day of the show.  Sketch tickets are limited one per fan per day.  Fans must be present at the appointed signing time to redeem their sketch ticket.  Not all artists appearing at the Top Cow booth will offer free sketches and fans should inquire at the booth on the morning they plan to get a sketch for availability.

Fans who stop by the booth will be among the first to grab a copy of the debut issue to mega-event series, Artifacts by Marz and Broussard. Artifacts promises to be Top Cow’s most ambitious series to date and will weave together story lines from a number of Top Cow titles, including Witchblade, The Darkness, Angelus and Broken Trinity: Pandora’s Box.  It has been known for some time that thirteen mystical Artifacts guide the fate of the Top Cow Universe.  For centuries, it’s been whispered that bringing together all 13 artifacts would bring upon mankind’s destruction.  The series will begin with a mysterious figure who seeks to put Armageddon into motion.  Artifacts #1 will arrive in stores on Wednesday, July 28th.

For up-to-date information on Top Cow’s plans at Comic-Con International in San Diego, please visit www.topcow.com or follow us on Twitter (@TopCow).

Top Cow Productions, Inc. (www.topcow.com), a Los Angeles-based entertainment company, was founded in December of 1992 by artist Marc Silvestri, who also co-founded Image Comics earlier that same year. Top Cow currently publishes its line of comic books in 21 languages in over 55 different countries. The company has launched 20 franchises (18 original and two licensed) in the industry’s Top 10, seven at #1, a feat accomplished by no other publisher in the last two decades. Its flagship franchise, WITCHBLADE, was TNT’s #1 original film of 2000 and the subsequent TV series was released on DVD on July 29, 2008. A feature film, co-produced by Platinum Studios, Inc. and Arclight Films, is slated to begin production in Australia with director Michael Rymer. WITCHBLADE is also the first American property to be fully adapted in Japan as an original anime and manga by Studio GONZO in 2006. Top Cow’s other flagship property, THE DARKNESS, was developed into a major next-generation video game release by Starbreeze and 2K Games and achieved platinum sales status. WANTED, an Eisner-nominated miniseries published by Top Cow from 2003-2005, is now a major motion picture from Universal Pictures starring Angelina Jolie, James McAvoy and Morgan Freeman. Virtually all of Top Cow’s other properties are in development as feature films, live-action television, animation or video games. Top Cow has also successfully licensed and merchandised its franchises into toys, statues, clothing, lithographs, puppets, posters, magnets, shot glasses, lighters, lunch pails, wall scrolls, mouse pads, die-cast cars, calendars, Christmas ornaments, Halloween masks, trading cards, standees, video games and roleplaying games.