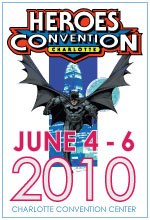 Press Release: Heroes Convention is preparing for one of the LARGEST Guest Lists in it’s 28 year history this June 4-6!  Pack your bags and gas up the car, because this will be one of our greatest shows of all time!  Making their First Appearance at Heroes Con this year are J. Scott Campbell, Brian Bolland, Humberto Ramos, Jimmy Cheung, and Rob Liefeld!  They’ll be joining the Heroes Con Family of regular All-Stars like Adam Hughes, Tony Harris, Frank Cho, Brandon Peterson, Mark Brooks, Tommy Lee Edwards, Phil Noto, Cully Hamner, and tons more!!

Long-time favorites like Ron Garney, Rick Leonardi, and Michael Golden are returning, as well as West Coast heavy-hitters like Mike Mignola, Tim Sale, Dustin Nguyen, Eric Canete, and Sean “Cheeks” Galloway.  It’s insane!!  Now we just have to figure out where to put everybody!  One thing is for sure, this all points to a stellar Art Auction on Saturday night!!

Also in 2010, Indie Island is stronger than ever with Jill Thompson, Evan Dorkin, Scott Morse, Jim Mahfood, and Kate Beaton onboard!  Like in previous years, there will be lots of exclusive artwork for Indie Island and always the coolest t-shirts!  In addition to the new wave of Indie folks, we’ll also host some of the all-time greats of the Independent Creators like James O’Barr, David Mack, Brian Pulido, and Joseph Michael Linsner!  It’s a powerhouse lineup this year!!
And, yes, even with EVERY artist in the comics industry in attendance (nearly!), we also get to have some of the most awesome writers in the world at Heroes Con, like Bill Willingham, Mark Waid, Christos Gage, Steve Niles, Jeff Parker, and the legendary Roy Thomas!
One thing we always try to do is to bring in the Artists and Writers that we get the most requests for, and this year we’re REALLY excited to have lined up several of the MOST requested of all time!  In addition to Campbell, Bolland, and Willingham, we can also confirm Kevin Maguire is finally making his first appearance at Heroes Con!  Joining Kevin in making their much-desired first appearance is Ben Templesmith, Todd Nauck, and Talent Caldwell!  It’s great to have these guys at Heroes Con!
As always, we could stage a major Battle Royal between all the Heavy Hitters from DC and Marvel at the show!  This year, from Marvel Comics we have Steve Epting, Mike McKone, Tom Raney, Mike Choi, and Skrappy Skottie Young!  From DC Comics, we have the Ever-Lovin’ Ethan Van Sciver, Mark Bagley, Billy Tucci, and Stephane Roux!  Lucky for us, if a Pier-Six Brawl should break out, we’ll have grappler Mick Foley in the house to keep things under control!  Mick (better known to some as Cactus Jack or Mankind) will be here on Saturday to make a big announcement at the 12 Gauge Comics booth!
For the full run down on the Guest List, just visit us here…

And, always keep up to date with the Heroes Convention news here…

There’ll be information and previews of exclusive art by J. Scott Campbell, Mike Mignola, and Skottie Young coming within the next few days!  There’s also 2-3 surprise guests in the works that we can’t announce just yet, so keep checking in!
See you at HEROES CONVENTION 2010, June 4-6!!!