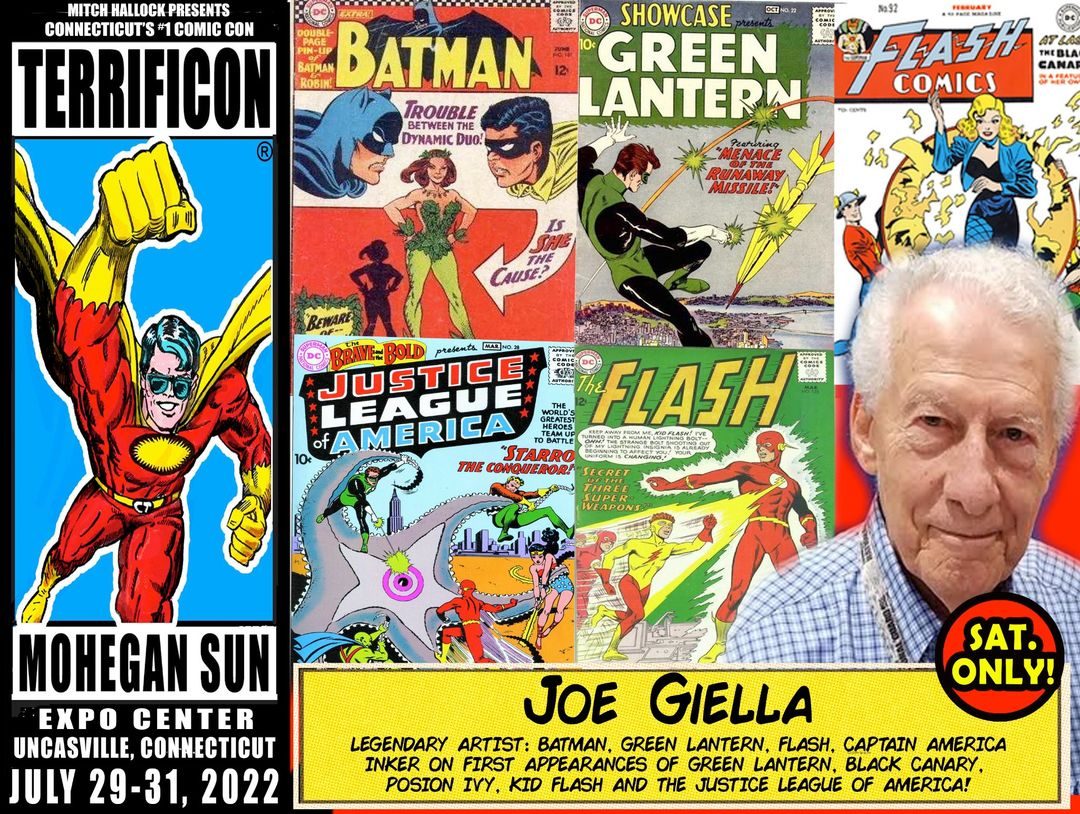 TERRIFICON is celebrating the long 4th July weekend with another firecracker guest announcement! Welcome back the LEGEND! Joe Giella who will be with us on Saturday only for a RARE appearance at Mohegan Sun! Joe just celebrated his 94th birthday last week and we are thrilled to have him back at TERRIFICON!

Born in 1928, Joe Giella grew up in the same neighborhood as Tony Bennett. He also attended the Manhattan’s School of Industrial art, where they both studied. Joe furthered his education at both Hunter College and the Art Students League in Manhattan alongside comic book legends Joe Kubert and Mike Sekowsky. Joe left the school 3 months shy of graduation to help support his depression era family.

Joe began his art career in the 1940s and at age 18 he began penciling the periodical cartoon “Captain Codfish”. Then he inked Captain Marvel stories in the mid 40s. Then he got a job with Timely comics freelancing and shortly after joined the staff. He soon began being an assistant on Captain America issues, he also did work on Human Torch, Submariner and Humor issues. Then in 1948 he joined the Naval Reserves and continued with them for 8 years.

Frank Giacoia convinced Joe to make his way to DC in 1951. Though an accomplished penciller, Joe Giella made his name at DC as a talented and versatile inker starting on The Flash, Green Lantern and Black Canary and others under the editor at DC Julius Schwartz. He did a lot of work with Carmine Infantino, Sheldon Moldoff, Gil Kane, and Neal Adams and his work on Batman and Detective comics is highly sought after by Bat-Fans. He still does convention appearances. He worked only occasionally on Justice League Of America until 1969, at which point he teamed with penciller Dick Dillin for a landmark tenure. Joe is also partially responsible for the Batman Logo update-he worked on with Carmine Infantino on Batman #170. The Batman logo has remained relevant and used on the cover until the end of the Vol.1 series is 2011. Giella also inked the first appearance of Poison Ivy in Batman #181.

Also took over as a penciler for the Batman daily comic strip for the newspaper after Sheldon Moldoff left it. Unfortunately he “ghosted” for Bob Kane meaning he did not credit for his work in this position.

Tickets for TERRIFICON at Mohegan Sun are on sale now at the website.