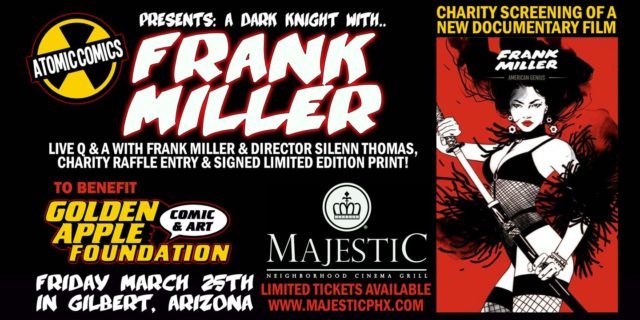 Majestic Neighborhood Cinema Grill is proud to host the only U.S. showing of the documentary FRANK MILLER: AMERICAN GENIUS with a live Q&A with Frank Miller! This event also marks the very first time the famed ‘Dark Knight Returns’ creator has appeared in Arizona in the entirety of his lengthy and accomplished career!

Presented in partnership with Atomic Comics in Gilbert, proceeds will benefit Golden Apple Comic & Art Foundation. Their mission is to preserve and showcase private collections and ensure that comics, books, art, and collectibles are secured for future generations to enjoy.

There will be two showings only: 6pm & 6:45 and seats are filling up fast so don’t hesitate to get tickets!

In addition, there will be a store Grand Opening autograph signing at the new Atomic Comics location in Gilbert, AZ on Saturday March 26th and they have proclaimed it Frank Miller Day!