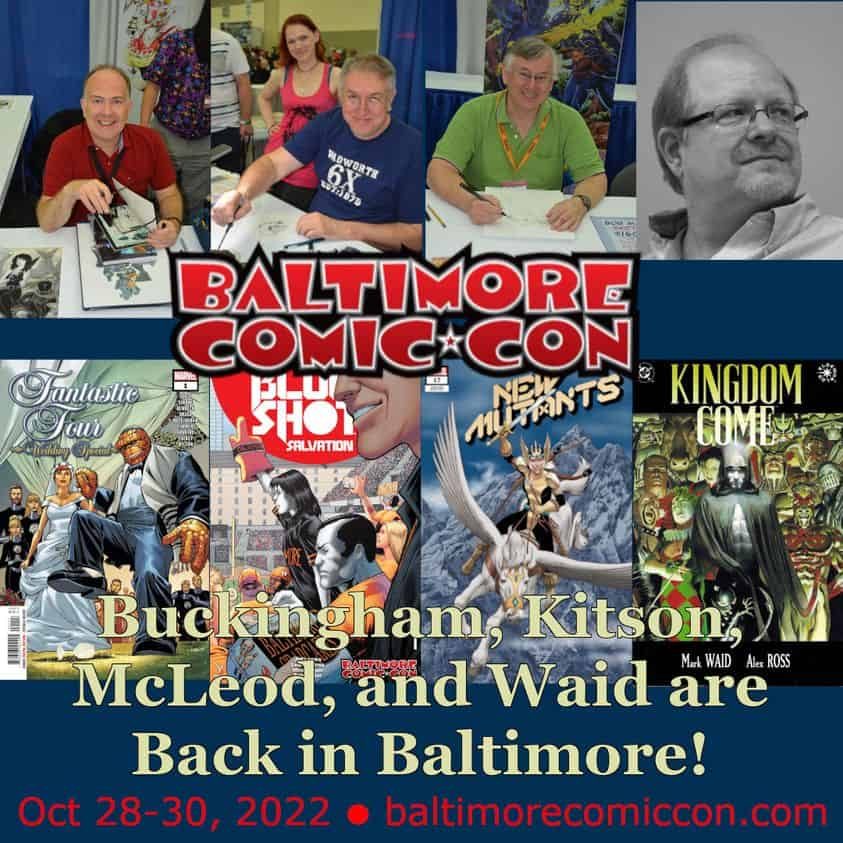 Mark Buckingham, who is best-known and most-celebrated for his work on the long-running Vertigo title Fables, began his career in 1990 working with Neil Gaiman on Miracleman from Eclipse Comics. Working on such titles as 2000 AD, Hellblazer, and Shade, the Changing Man, he became a mainstay at DC Comics after taking over art duties on Fables with issue #6. His run on the popular imprint title has earned him four Eisner Awards, including Best New Series in 2003, Best Serialized Story in 2005 and 2006, and Best Artist/Penciler/Inker in 2007.

Barry Kitson’s first professional work was Spider-Man for Marvel UK. He has worked on many titles including Future Shocks, Judge Dredd, and Judge Anderson for 2000 AD; Batgirl, L.E.G.I.O.N., Adventures of Superman, Shadow of the Bat, Azrael, JLA Year One, Batman: Legends of the Dark Knight, The Titans, Empire, and Legion of Super-Heroes for DC Comics; Wolverine, The Order, Secret Invasion: Fantastic Four, and The Amazing Spider-Man for Marvel Comics; and many more.

Bob McLeod is best known for co-creating and illustrating The New Mutants for Marvel Comics. He began his career with Marvel’s Crazy magazine, penciling, and inking movie and TV satires and the Teen Hulk strip. He has pencilled or inked all the major characters for Marvel and DC, including Spider-Man (most notably Kraven’s Last Hunt), The X-Men, Superman, Batman, Wonder Woman, GI Joe, Star Wars, The Hulk, Conan, and many more. Bob also wrote and illustrated a children’s alphabet book, Superhero ABC, published by HarperCollins, which received starred reviews. He edited and wrote articles for Twomorrows’ Rough Stuff magazine and taught art at the Pennsylvania College of Art & Design for many years. He’s currently doing occasional variant covers for Marvel and commissions for his fans, along with occasional freelance jobs and personal projects. His website is bobmcleod.com.

The multiple Harvey and Eisner Award-winning Mark Waid has been the voice behind dozens of series that have resonated throughout comics fandom and the creative community alike. His more acclaimed runs include DC Comics’ The Flash, Kingdom Come, JLA: Year One, JLA, Legion of Super-Heroes, and Superman: Birthright, Marvel Comics’ Captain America, Fantastic Four, Amazing Spider-Man, The Indestructible Hulk, and Daredevil, BOOM! Studios’ Incorruptible and Irredeemable, Archie Comics’ Archie, and his creator-owned works Empire and Potter’s Field. He currently serves as Publisher (U.S.) at Humanoids.

“It is so fantastic to have these gentlemen back with us in 2022,” said Marc Nathan, show promoter for the Baltimore Comic-Con. “These four individuals are responsible for such an amazing body of work within the comics oeuvre, from historic runs on key titles to stunning standalone stories. It’s going to be an amazing weekend in 2022, and having everyone at the show just serves to underline that statement!”