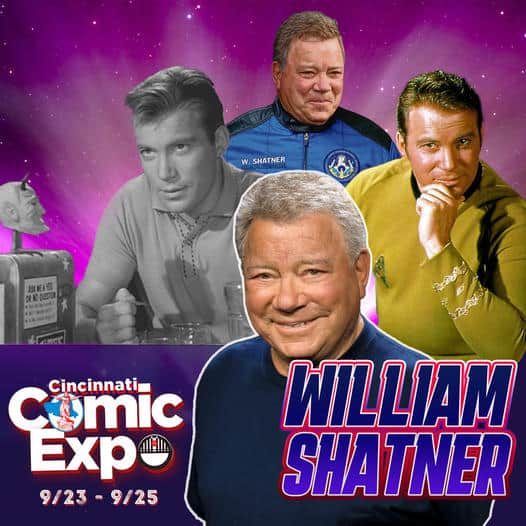 William Shatner will be a guest at the 2022 Cincinnati Comic Expo on Saturday and part of Sunday!

Shatner is a legendary actor, producer, director, musician, author and, most recently, an astronaut. With over 200 projects and credits over a 7-decade career, he is most recognized as the iconic Captain James T. Kirk from Star Trek. Just a few of his television starring roles include T.J. Hooker, Rescue 911, TekWar, The Practice, and Boston Legal, as well as guest appearances on The Twilight Zone, Mission: Impossible, The Big Bang Theory, and others. On the big screen, his roles have ranged from Airplane II: The Sequel, Loaded Weapon 1, the Miss Congeniality films, Dodgeball, Fanboys, Free Enterprise, and more.

In October 2021, Shatner flew to space on Blue Origin’s second human spaceflight and became the oldest person to fly to space.

Get your admission tickets to the 2022 Cincinnati Comic Expo for an opportunity to get an autograph and photo with William Shatner: tinyurl.com/yck6ku8m