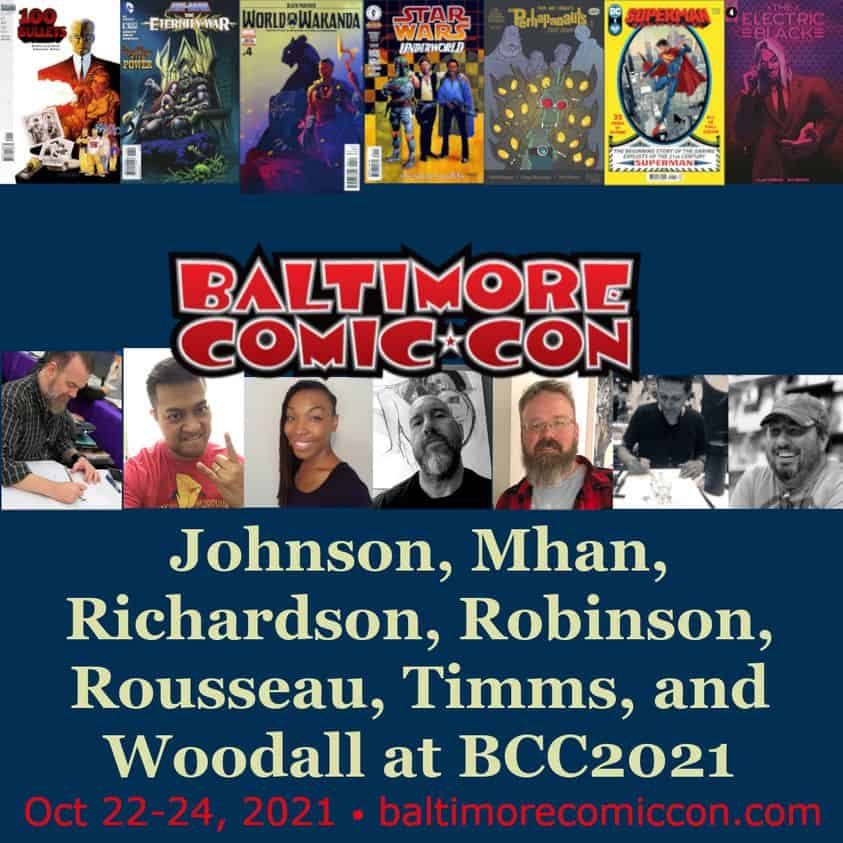 Come to the Baltimore Comic-Con this October 22-24, 2021 at the Baltimore Convention Center in Baltimore’s beautiful Inner Harbor. The Baltimore Comic-Con is happy to announce comic artists Dave Johnson, Pop Mhan, Afua Richardson, Andrew Robinson, Craig Rousseau, John Timms, and Rich Woodall will be attending our 2021 event. Get your tickets now and avoid waiting in additional lines upon your arrival!

An officially ordained Methodist Deacon, “Reverend” Dave Johnson may be best known for his minimalist covers on the noir Vertigo series, 100 Bullets. He has done all 100 covers. He has also done a number of covers for DC Comics, primarily Batman and Detective Comics. Dave also worked with Erik Larsen on the mini-series Superpatriot: Liberty & Justice. He is also known for his work with Marvel on Deadpool. Dave is the principal founder of “Drink and Draw”, a get-together of professional artists that spawned an art book by the same name. Mr. Johnson earned the 2002 Eisner Award for Best Cover Artist. He was also nominated for an Eisner in 2004 for his work on the critically-acclaimed DC Elseworlds miniseries Superman: Red Son, which is now a perennial bestseller in graphic novel form.

Pop Mhan was lucky enough to get his jump into the comics industry under the tutelage of Jim Lee at Wildstorm Productions. Since those early days, his art has graced the pages of comics from Marvel Comics, DC Comics, Top Cow, Dark Horse Comics, and Tokyopop. His recent work can be seen at DC Comics, where he has been penciling licensed properties like Gears of War 3 and He-Man and the Masters of the Universe, and Marvel Comics on All-New X-Factor and variant covers for Amazing Spider-Man.

Afua Richardson (pronounced “ah-FOO-wah”) is an award-winning American comic book illustrator best known for her work on Marvel’s Black Panther: World of Wakanda. Some of her other works include The Wild Storm, Attack on Titan, X-Men ’92, Captain Marvel, and All-Star Batman to name a few. Afua is also a musician, voice actor, activist, and mentor. As a recipient of the Nina Simone award, she is aptly called a Jane of All trades.

Andrew Robinson has painted covers for all the major publishers, illustrating such titles as Batman Detective, Hawkman, Starman, Superman Rebirth, Iron Man, Hydra, Star Wars, Black Panther, and The JSA. He is a multi-award winning, New York Times best-selling illustrator for his painted work on the graphic novel, The Fifth Beatle. More of his sequential work can be seen in Batman Black and White #5, The Ride: My Brother’s Keeper, Gen 13, Dusty Star, and Harley Quinn. Most recently, Andrew has painted covers for Rick Remender’s new Image book, Scumbag. Also, he illustrated issue 2. Andrew lives in Altadena, CA. You can follow Andrew on Instagram @spacejunkees. To order Andrew’s books, prints, and buy original art, please visit essentialsequential.com.

Craig Rousseau has been working in the comics industry for over 2 decades, working for all the major publishers, including DC (Impulse, Batman Beyond, Harley Quinn, Batman ‘66) and Marvel (Iron Man Armor Wars, Captain America and the Korvac Saga, Spider-Man Loves Mary Jane). Besides Young Hellboy from Dark Horse Comics, he’s currently working on the latest adventures of his creator-owned book, The Perhapanauts (with Todd Dezago) at Black Caravan… and a few other things.

John Timms was born and raise in Costa Rica. He studied Graphic Design at Universidad de Costa Rica and worked for a long time as an animator, jumping to comics, a medium he always loved, eight years ago. He has worked on different series, including Inhumans and Nova for Marvel, and for DC Comics, Harley Quinn, Catwoman, Young Justice, Infinite Frontier, Superman, and he is the current artist for Superman: Son of Kal-El. He lives in Costa Rica with his wife and two daughters.

Rich Woodall is the Co-Publisher of Black Caravan, a Scout Comics Imprint. He is also the creator or co-creator of The Electric Black, Gods of Brutality, Kyrra: Alien Jungle Girl, Johnny Raygun, Sgt. Werewolf, Space Force, and Zombie Bomb! Woodall has also worked on covers for Teenage Mutant Ninja Turtles, The Last Ronin, The Powerpuff Girls, Masters of the Universe, Crossover, and Phantom Starkiller.

“These are some heavy hitters,” said Marc Nathan, show promoter for the Baltimore Comic-Con. “The creative talent presented by these guests is off the charts, with seminal works, iconic covers, and cutting-edge titles. We’re going to have a great show this year!”