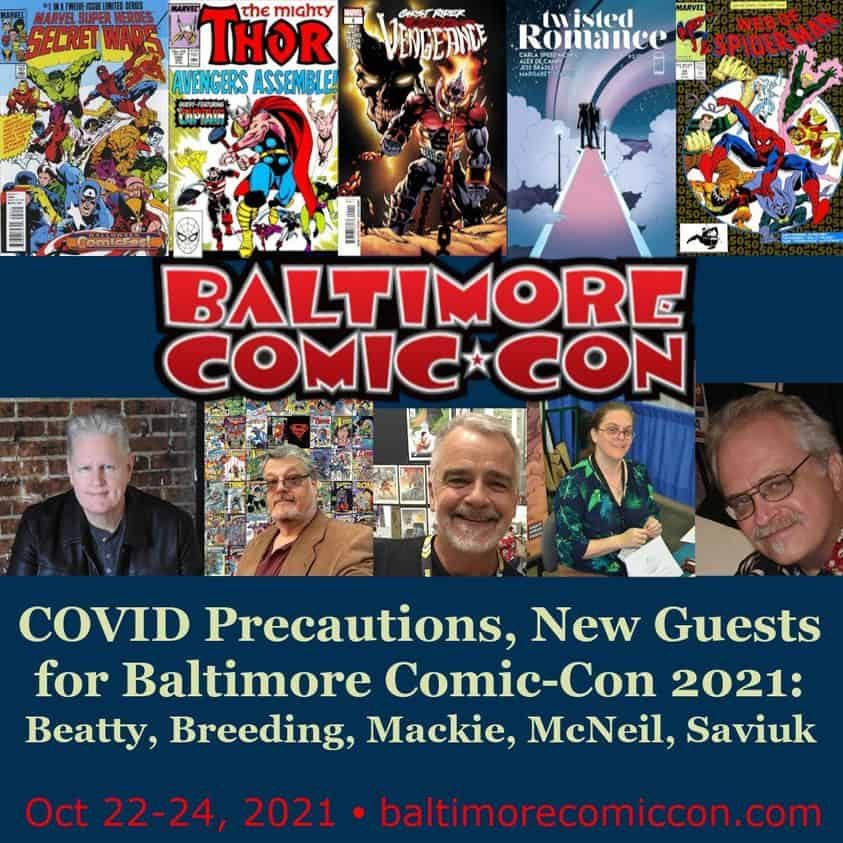 The Baltimore Comic-Con is thrilled to announce that John Beatty, Brett Breeding, Howard Mackie, Carla Speed McNeil, and Alex Saviuk will be joining us in 2021!

John Beatty got his first break working for Marvel and DC Comics when he was 19. The year was 1980 and the decade that followed is now referred to as the “Bronze Age” of comic books! Beginning with short filler stories for DC Comics anthology books, Beatty soon found himself as the finisher on the JLA working over George Perez. However, the run was limited to 4 issues due to Marvel Comics offering him the inking duty over his favorite character, Captain America, with his long-time mentor and collaborator, Mike Zeck. Coming off of a 2.5 year run on Cap, Zeck and Beatty were tagged to do the art on the first major clash of heroes and villains, Marvel Super Heroes: Secret Wars! which saw the change of Spider-Man’s costume to black in issue #8 of the series, something that turned into a bigger deal as Venom. After Secret Wars, the team of Zeck and Beatty produced the hit limited mini-series and a graphic novel starring Marvel’s newest “A-List” character, The Punisher. The last major work the team produced was the Captain America Annual 8. Covers for Captain America, G.I. Joe, and many other titles were a staple of work for the team during the ’80s. Beatty continued projects for Marvel, including Thanos Quest, Squadron Supreme, Venom: The Madness, and others. At DC Comics, John was the inker for Batman: Year 3 and the first 5 issues on the new Batman title, Legends of the Dark Knight. Eight years of work on various Batman titles with writer Doug Moench and penciler Kelley Jones became well-known in the ’90s, including the last 2 installments on the Vampire/Batman GN series, other Batman graphic novels, and a 3-year run on the monthly Batman title, recently reprinted in two beautiful hardcover editions. Eventually turning his sights on DC Licensing, Beatty has produced vector ink and color for style guides, from movies to animated series to products such as toys, cards, packaging, and clothing, among other things. This is uncredited work, but is still being used. Traditional inking is still Beatty’s main love, and he continues to practice it and teach those around him who want to learn.

Howard Mackie was dragged kicking and screaming into writing his first comic book (Iron Man #211) a few years ago, and has been working in comic book publishing ever since. Chronicling the adventures of Ghost Rider, Spider-Man, The X-Men, X-Factor, Gambit, Wolverine, Batman, and countless other characters for Marvel, DC, and Archie Comics. His most recent work for Marvel was Ghost Rider: Return of Vengeance. Mackie also takes on writing commissions (haven’t you always wanted to have an original comic book script page or two written for you?) and can be contacted at Howard Mackie-Writer on Facebook.

Carla Speed McNeil is the author and artist of Finder. She started working in comics in 1997 and hasn’t stopped since. She has also worked on a variety of projects like providing art for Queen & Country: Operation: Stormfront from Oni Press, adapted and drew Pendragon: The Merchant of Death (based on the prose book by D. J. MacHale) for Simon & Schuster, and drawn fan-favorite Frank Ironwine for Apparat/Avatar, as well as two pages of Transmetropolitan for DC/Vertigo, both by Warren Ellis. Bad Houses was released in 2013 by Dark Horse Comics, after which she began a long series of collaborations with writer Alex De Campi, including Ashes, My Little Pony (IDW), and No Mercy (Image) beginning April 2015. Other smaller projects have included drawing Legends of Red Sonja (Dynamite), the short story “Here. In My Head” (with writer Elizabeth Genco) for Comic Book Tattoo from Image, and shorts in notable anthologies such as The Sleep of Reason and Cautionary Fairy Tales of Africa. She has won an Eisner Award, Ignatz Awards, the Kim Yale New Talent Award from Friends Of Lulu, the L.A. Times Book Prize for graphic novel in 2012, and three Stumptown Comic Arts Awards.

Alex Saviuk started his professional career at DC Comics in 1977 after studying sequential art with Will Eisner at The School of Visual Arts in NYC. Within a few short months, he became the regular artist on Green Lantern and The Flash. He also drew Superman, Hawkman, Aquaman, The Atom, and Air Wave, among others. In 1986, Alex moved over to Marvel Comics, filling in on Iron Man 211 and various covers before eventually becoming the penciler on Defenders of the Earth, featuring The Phantom, Flash Gordon, and Mandrake. Then, after successfully filling in on Amazing Spider-Man for 3 issues, he started a 7+ year run on Web of Spider-Man followed by over 2 more years on Spider-Man Adventures. From 1997-1998, Alex penciled the last 12 issues of The X-Files for Topps Comics (#30-41). In 2003, he joined the ranks of a Swedish and an Australian publisher chronicling the adventures of Lee Falk’s The Phantom. In 2004, he also assisted his mentor Will Eisner (legendary creator of The Spirit) on The Spirit Meets The Escapist published by Dark Horse, which unfortunately was Will Eisner’s last completed work before his passing in January 2005. Alex also worked on the graphic novel Feast of the Seven Fishes, glowingly reviewed by Stan Lee; it was nominated for an Eisner Award in 2006, and that same year, the Spider-Man newspaper strip, on which Alex worked, also received a Harvey nomination. In 2012, Alex worked with Stan Lee on a mainstream superhero book called Stan Lee and The Mighty Seven published by Archie Comics. Besides comics, Alex also does storyboards and conceptual art for advertising agencies and the occasional feature film (Never Back Down, The Reaping, Hoot, and Lonely Hearts). Currently and recently, besides drawing The Phantom, Alex contributed pencils and inks for 11 variant covers for Marvel’s Symbiote Spider-Man mini-series. Alex’s co-creation with writer Gerry Conway, Tombstone, appeared in the academy-Award winning hit movie Into the Spider-Verse! Also, the Eisner Award-nominated graphic novel Feast of the Seven Fishes by Robert Tinnell and Alex Saviuk is now a major motion picture directed and produced by writer Robert Tinnell and opened in mid-November 2019 to glowing reviews as a top ten holiday movie to watch! The book itself is still available online on Amazon.com and Barnes and Noble, among others!

“We’re bringing in some industry giants this year,” said Marc Nathan, show promoter for the Baltimore Comic-Con. “All five of these guests’ body of work is significant in their respective segments of the industry, and their fans will be excited to get to see them. And we really appreciate everyone understanding the health situation and working with us to ensure a safe weekend for everyone attending. We’re excited to be able to hold a live event again, as are our guests, exhibitors, and retailers!”

The health and safety of our attendees, vendors, and staff are of the utmost importance to us. Due to concerns over the spread of COVID, we will be putting some safety measures in place.

Must fit properly and snugly, fully covering both the nose and mouth and secure under the chin.

Face coverings with valves, mesh, costume masks, damaged masks, neck gaiters, and face coverings that cannot be secured under the chin will not be allowed.

Face coverings must be visible at all times. Any headwear or cosplay pieces that cover the face in a way that does not visibly follow the face covering policy will not be allowed.

Proof of vaccination with any vaccine approved or authorized by the WHO or the FDA, or proof of a negative COVID test within 72 hours of admission to the convention for all attendees, vendors, guests, and convention staff.

Proof of vaccination may be presented on a smart phone, or with a physical copy of the card along with a government issued ID that matches the name on the proof.

Self-test results will not be accepted as proof of a negative COVID test.

We appreciate everyone following these extra steps to keep everyone – particularly our older and more vulnerable attendees – as safe as possible.

As noted on the website, tickets are non-refundable. If you are unable to attend due to these guidelines, please reach out to us so we can make alternate arrangements.