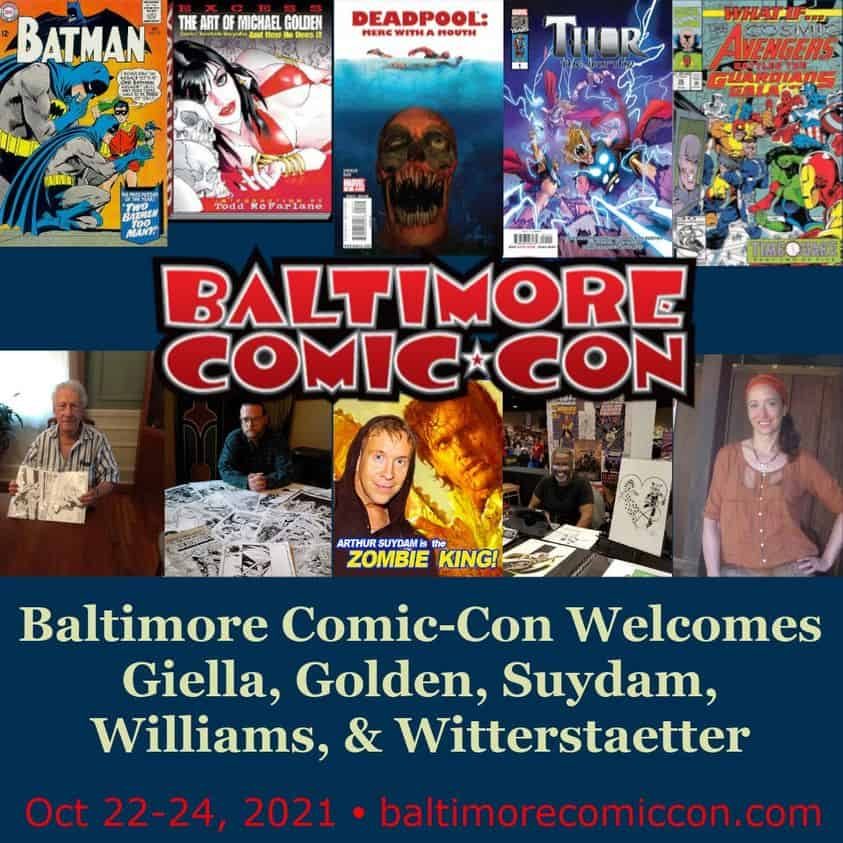 Joe Giella is the oldest living artist to have worked on Batman. This Golden and Silver Age creator worked at Timely, Marvel, and DC Comics as a penciller and inker. In addition to working on the comic, Giella provided pencils and inks on the Batman syndicated strip, as well as the syndicated Flash Gordon, The Phantom, Mary Worth, and Sherlock Holmes comic strips. The United States Postal Service honored Giella by using two of his pieces of art for their 2006 “DC Super Heroes” collection of postage stamps. He has been honored with an Ink Pot Award, as well as being presented with the Hero Initiative Lifetime Achievement award at the 2016 Harvey Awards ceremony.

Artist/writer/creator Michael Golden is a legend in the comic book industry, but one that has never stopped adding to his legacy as a storytelling professional. Co-creator of the X-Men’s Rogue character, Spartan X, and Bucky O’Hare, Michael is known worldwide for his groundbreaking work on The ‘Nam, Micronauts, G.I. Joe Yearbook, and Dr. Strange, among much more, and is counted as one of the best cover designers and illustrators in the business. Golden’s work can be seen on covers from The Walking Dead, Civil War, Rom, Micronauts, Spawn, Nightwing, Iron Man, Heroes for Hire, Exiles, Demon’s Regret, Spider-Man, Vampirella, Captain American, The Punisher, and The Hulk, as well as numerous other titles for about every company out there. His zombie art is routinely used in conjunction with popular properties on TV and in print. Recent books covering the colorful life and amazing art of Michael Golden include a manga version of the Bucky O’Hare series as well as the top selling art retrospective Excess: The Art of Michael Golden, written by Renee Witterstaetter, which sold out and has gone into a second printing, as well as his recent sketchbooks Heroes and Villains, MORE Heroes and Villains, Michael Golden: Alchemy, and Michael Golden: Dangerous Curves. Michael has served as an Editor at DC Comics as well as Senior Art Director at Marvel Comics, and has worked on scores of movie production projects, some currently in development. His art has been the focus of gallery shows in places as diverse as Gijon, Barcelona, New York, Antwerp, and Brussels, while his class on storytelling has been conducted in Spain, Brussels, France, Canada, the United States, and, most recently, China. He has recently been awarded with Lifetime Achievement Awards from The University of Maryland Eastern Shore and the Lille Arts Festival, with gallery shows of his work in Spain, New York, Maryland and Moscow, and many points in between.

Arthur Suydam, “The Zombie King”, rose to stardom for his work on the smash hit series Marvel Zombies. The POPs world have been taken over by his rendition of the Marvel Zombies as well! He is also renowned as the Deadpool cover artist on Merc with a Mouth as well as DCeased, Black Panther, and The Walking Dead. And he is credited as being one of the first artists to bring fine art painting techniques to the world of comics in such books as Cholly and Flytrap and Mudwogs. Recent awards for Arthur include The Spike TV Scream Award (Best Artist), Spectrum Gold Award for Institutional Art, The San Sebastian Film Festival Lifetime Achievement Award, as well as the University of Maryland Eastern Shore Lifetime Achievement Award, among others. His work can also be seen on works for DCeased, The Walking Dead, Deadpool, Batman, Wolverine, Fantastic Four, X-Men, Ghost Rider, Army of Darkness, Vampirella, and too many to name here. His Cholly and Flytrap series has recently been compiled into a collected volume, marking that story’s place in comic history.

Keith Williams, comic book inker, enrolled in the School of Visual Arts in New York City from 1976 to 1980. Keith received his Bachelor of Fine Art in Media Arts and studied under Will Eisner, the creator of The Spirit comic strip. With the help of Marvel comic book artist and mentor Don Perlin, Keith started working for Marvel Comics in 1982 as a background inker. He worked for inkers including Joe Sinnott and Mike Esposito. At Marvel, he became the first John Romita Raider, an art correction group. Keith later became an assistant editor under Jim Owlsley (Christopher Priest) on the Spider-Man group of books. The two became the first all-black editorial team in Marvel’s history. He later became John Byrne’s background artist on Alpha Flight, The Hulk, Superman, and Action Comics. Keith began inking regularly on Web of Spider-Man, which lasted for four years. In between that time and after, he worked on many other books at Marvel, including Silver Surfer, She-Hulk with John Byrne, Warlock, Quasar with Greg Capullo, Star Trek, and the X-Men. At Dark Horse Comics, he worked on The Mask and Walter with artist Doug Manke, and Star Wars Droids. At DC Comics, he was on Superman, and the Lobo/Mask graphic novel with Doug Manke. For Valiant, he worked on Quantum and Woody and the covers of X-O Manowar. At Moonstone Comics, he was on The Kolchak Night Stalker Chronicles, Buckaroo Banzai, and Domino Lady. For ten years, he had worked on The Phantom for King Features Syndicate. And at Avatar Press, he inked Lady Death and Crossed covers, a Crossed webisode comic, “Wish You Were Here”, and the cover and interiors of the comic book Uber. He has also inked Avatar Press’ published graphic novel Max Brooks’ Harlem Hellfighters. And recently, he has inked over Ron Frenz pencils for Marvel’s Thor the Worthy one-shot book.

Renee Witterstaetter began the comic phase of her career working on such titles as Guardians of the Galaxy, Thanos Quest, Superman, Silver Surfer, Conan The Barbarian, The Punisher special projects, and Conan Saga, then going on to spearhead the reintroduction of She-Hulk at Marvel as well, as part of that legendary run. She then moved to Topps Comics where she was the editor on X-Files, Jurassic Park, Xena, and Hercules, and is the co-creator with Jackie Chan and artist Michael Golden of the successful series Spartan X, which will be made into a trade paperback featuring new material. She is also the colorist on hundreds of comics from The Avengers to Spider-Man to Captain America to Jurassic Park, among many, many others. She is the writer of Nick Cardy: The Artist at War, Excess: The Art of Michael Golden, Kerry and the Scary Things, Dying for Action: The Life and Film of Jackie Chan, and more. She is the President of Little Eva Ink Publishing and Eva Ink Artist Group, which represents artists and writers in comics, storyboards, fine art painting, and more. Renee is also one of the producers of the Creator Chronicles DVD series with Woodcrest Productions, featuring interviews with major industry creators such as George Perez, Bill Sienkiewicz, Michael Golden, Joe Jusko, Matt Wagner, Joe Sinnott, and many more. Other projects also include the books Michael Golden: Dangerous Curves, Santa Confidential with Hagar the Horrible artist Chris Browne, and Mark Texeira: Tempest. In her not-so-abundant free time, she lectures on storytelling, most recently in China and Russia, fishes, dances, travels, and is also curating several major art exhibits featuring U.S. and European talent.

“This batch of guests has been so influential,” said Marc Nathan, show promoter for the Baltimore Comic-Con. “Their combined contribution to the comics landscape is truly significant, from a Golden Age giant to a modern age master of the macabre. They have all worked on impactful titles and issues, and we’re thrilled to bring them for their fans this year.”