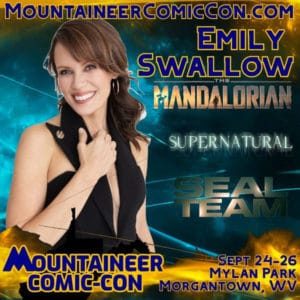 The Mandalorian quickly invigorated the Star Wars fanbase, when it debuted in 2020. The show features many stars, from television and film. The Armorer, a character featured prominently, in season one, is portrayed by Emily Swallow.

Emily adds the Star Wars universe, back to Mountaineer Comic-Con, after early cancellations. Along with her credits on The Mandalorian, she portrayed ‘The Darkness,’ or Amara, the sister of God, on Supernatural.

Emily will be joining us September 24-26, 2021, at Mylan Park, in Morgantown, West Virginia, for Mountaineer Comic-Con.