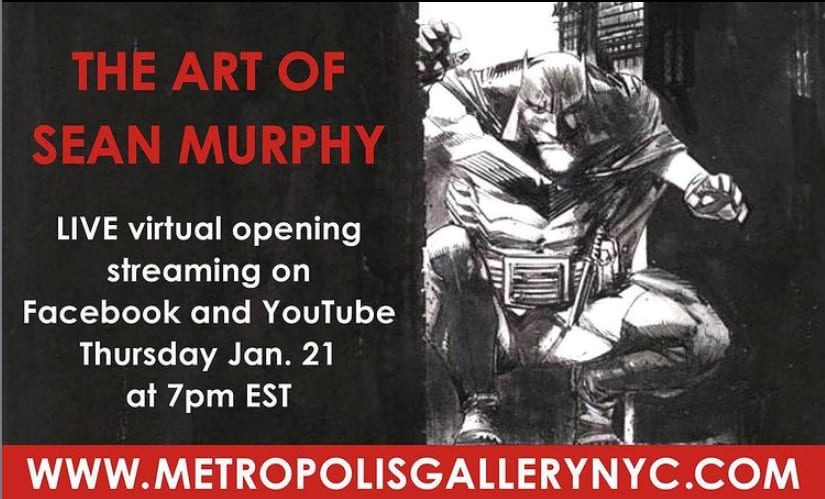 Metropolis Gallery is pleased to announce a virtual exhibition of original artwork by renowned artist and writer Sean Gordon Murphy, who will be bringing his unique and awe-inspiring originals to a venue where they can be appreciated in all of their hand crafted glory.

The show opens on Thursday, January 21st at 7pm EST with a virtual reception featuring a live interview with Sean that will be viewable online through our social media outlets. Art will go live for sale opening night.

Murphy is most well-known for his series of books that began with Batman: White Knight, featuring an alternate reality in which the roles of the Joker and Batman are reversed from hero to villain and vice-versa. The series proved so successful that it spawned a ‘Murphyverse’ including the sequel series Batman: Curse of the White Knight, a one-shot featuring Mr. Freeze, and a mini-series focusing on his new iteration of Harley Quinn.

“Sean has such a distinctive style his work is instantly identifiable as his own, which is a rare quality,” said Metropolis Gallery curator and owner Vincent Zurzolo. “The detail and craftsmanship in these pieces are stunning. From the architecture to the vehicles, you can plainly see his work is something he takes great pride in.”

Murphy began drawing comic books while still attending the Savannah College of Art and Design, working on several projects with DC and Oni Press. In 2005 he wrote and illustrated the original graphic novel Off Road, which would win an American Library Award for young adults.

Murphy’s first high profile work was the DC/Vertigo mini-series Joe the Barbarian written by Grant Morrison. That began a trend of Murphy working with some of the most revered writers in comics, including American Vampire: Survival of the Fittest and The Wake with Scott Snyder, Chrononauts with Mark Millar, and Tokyo Ghost with Rick Remender.

The success of these books would allow Murphy to return to writing his own material, first with the Vertigo series Punk Rock Jesus, which told the tale of a plan to resurrect Jesus Christ through cloning. The book was Murphy’s attempt to provide commentary on the current state of religion, politics, and the media.

The exhibition will predominantly feature Murphy’s work from the White Knight series, with Curse of the White Knight #2 featured nearly in its entirety. There will also be a few pieces from his, increasingly in demand, covers and variant covers for a variety of other titles.

“We have a great selection of work from Sean, with prices ranging from $300 – $15,000, there’s a really nice selection of preliminary drawings in addition to the published pages and covers, something for collectors at every level,” added Zurzolo. “We expect demand for the work in this show to be quite high, as Sean’s originals should only increase in value over time.”

“While it’s unfortunate that we’re not able to make this exhibition as grand as it deserves, it is exciting to be able to use new technologies to bring Sean’s work to his devoted fans.”

The show opens on Thursday, January 21st with a virtual reception featuring a live interview with Sean that will be viewable through our social media outlets.

Metropolis Gallery is located at 36 West 37th Street, 6th Floor, a short walk from both Grand Central and Penn Station.

Metropolis Gallery is the creation of Metropolis Collectibles, the world’s largest vintage comic collectibles dealer. Together with its online auction house, ComicConnect, the company has an evolving inventory of more than 150,000 collectibles and holds five Guinness World Records.