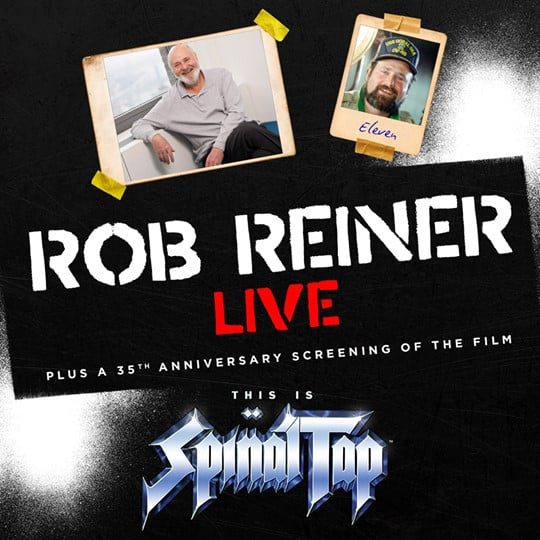 Join director and co-writer Rob Reiner at the Hanover Theatre on Thursday, April 16, 2020 at 7:30 PM as he shares stories from his expansive career, answers your questions in a moderated discussion and presents a full-length screening of “This Is Spinal Tap” on the big screen. A limited number of VIP photo ops with Rob will be available.

Over the last 35 years, “This Is Spinal Tap” has become a revered movie that has shaped American culture and influenced film-making. “This Is Spinal Tap” is the holy grail of mockumentary style film-making. While critics (New York Times, Newsweek, Chicago Tribune among others) have praised the film, the audience that it resonated most with was that of musicians and their fans. Disciples include Jimmy Page, Ozzy Osbourne, Kurt Cobain and members of U2, Aerosmith and Metallica.

The New York Times placed the film on their list of “the best movies ever made,” while the Writers Guild of America ranks it as the 11th funniest screenplay in film history. “This Is Spinal Tap” was selected for preservation in the United States National Film Registry in 2002.

American actor and filmmaker Rob Reiner has made an undeniable impression on film and TV. As an actor, Reiner first came to national prominence with the role of Michael Stivic on the ground-breaking TV series “All in the Family,” earning him two Emmy® Awards. As a director, Reiner has been recognized for his many films including “Stand By Me,” “A Few Good Men,” “Misery,” “The Princess Bride” and “When Harry Met Sally.”