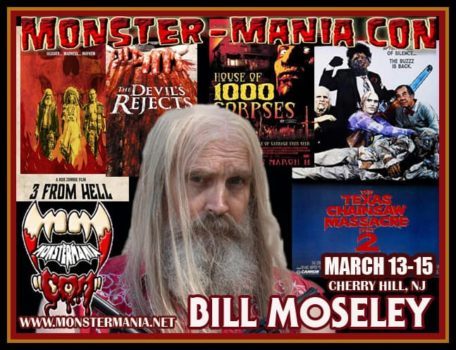 We are VERY excited to announce that our good friend BILL MOSELEY will be returning to MONSTER-MANIA CON 45 the weekend of MARCH 13-15 at the Crowne Plaza Hotel in Cherry Hill, NJ! BILL will be joining RICHARD BRAKE and JEFF DANIEL PHILLIPS for a 3 FROM HELL reunion at the show!

BILL MOSELEY will be appearing all three days of the show.

BILL has starred in the role of OTIS DRIFTWOOD in Rob Zombie’s trilogy of films telling the tale of the FIREFLY family beginning with the 2003 film HOUSE OF 1000 CORPSES. BILL reprised the role of OTIS in the extremely popular 2005 sequel THE DEVIL’S REJECTS. Most recently BILL played the character one more time in 2019’s sequel 3 FROM HELL.

The list of film and television projects BILL has starred in is seemingly endless but they include 2001 MANIACS: FIELD OF SCREAMS, BLOOD NIGHT: THE LEGEND OF MARY HATCHET, THE HAUNTED WORLD OF EL SUPERBEASTO, REPO: THE GENETIC OPERA, 2007’s HALLOWEEN, GRINDHOUSE, THE FIRST POWER, THE BLOB and many, many, many more!

Don’t miss your chance to meet BILL MOSELEY at the show! Tickets are already selling very quickly! Visit our ticket webpage and order your tickets today!

Wolf Studios will also be offering the pro photo op with the BILL MOSELEY and also offering a 3 FROM HELL Group Photo Op with BILL MOSELEY, RICHARD BRAKE and JEFF DANIEL PHILLIPS. You can purchase yours today at:
https://purchase.growtix.com/events/landing/Monster_Mania_45_Photo_ops

Monster-Mania Con 49 has a HUGE line-up!