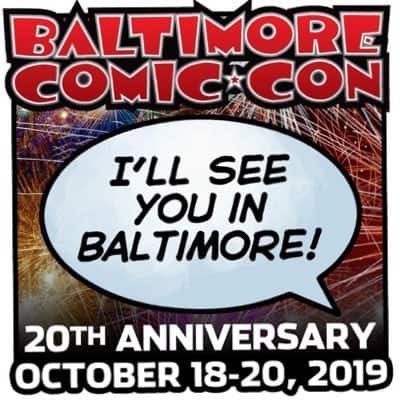 The Baltimore Comic-Con is pleased to welcome back friends of the show Francesco Francavilla, Ron Randall, Stan Sakai, Doug Wagner, and Kelly Yates. Come celebrate 20 years of comics at the Baltimore Comic-Con on October 18-20, 2019 at the Inner Harbor’s Baltimore Convention Center. You can purchase tickets online now on our website.

Eisner and Eagle Award-winning Francesco Francavilla has found a niche in the comics industry with his noir stylings. His Afterlife with Archie from Archie Comics received a Harvey Award nomination in 2014 for Best New Series. He has also provided art on DC Comics’ Detective Comics and Swamp Thing, Marvel’s Black Panther: The Man Without Fear, and you will find his artwork gracing covers for Marvel’s All-New Hawkeye, Master of Kung Fu, and Princess Leia, Archie’s Archie vs. Predator and The Black Hood, and Dynamite Entertainment’s Reanimator and The Twilight Zone: Shadow and Substance. Most recently, you’ll find his covers and interiors on IDW’s Star Wars Adventures: Return to Vader’s Castle. and covers on Archie’s Archie: 1955 and Dynamite Entertainment’s Red Sonja & Vampirella Meet Betty & Veronica.

Ron Randall started his professional career at DC Comics with a two page back-up story in Unknown Soldier, which was followed by stories in Sgt. Rock, The Warlord, Arak, Son of Thunder, and Swamp Thing. He is well-known for having created Trekker at Dark Horse Comics back in 1987 for Dark Horse Presents, and he published the character again in a new serialized version of the same title starting in 2013. More recently, Ron provided art on Sasquatch Detective Special from DC Comics, and his collected trade paperback Trekker: Chapeltown was published in 2018 by Dark Horse Comics.

Best known as writer and artist for his Usagi Yojimbo title, Stan Sakai first created and published it in 1984, launching in Albedo, a self-published anthology, followed by an appearance in Critters from Fantagraphics in 1985, and finally as its own series from the same publisher in 1987, all in black & white. In 1993, Usagi made the jump to color at Mirage Publishing, and moved to Dark Horse in 1996. In 2019, Usagi Yojimbo moved to IDW Publishing, relaunching with an issue #1. Nearly 30 years of Usagi Yojimbo have seen print in book, TV, and digital formats.

Doug Wagner has been writing comics professionally since 2004 and has worked with a multitude of companies. The list includes DC Comics, Image Comics, 12-Gauge Comics, Top Cow Productions, Dynamite Entertainment, and Table Taffy Studios. His recent projects include Plastic (April 2017) and The Hard Place (August 2017), both from Image Comics, as is his current Image title, The Ride: Burning Desire. Doug now lives in the Wasatch Mountains of Utah with his lovely wife. His days are filled with fighting deadlines and flirting with distractions.

Kelly Yates has provided artwork for Amber Atoms, Tales of Tellos, and The Perhapanautsat Image Comics, numerous Doctor Who titles at IDW, Fear Agent at Dark Horse Comics, and JLA-Z at DC Comics. He also wrote Image’s Amber Atoms, and contributed to Artist Alley Comics as well with his creator-owned MonstHer title.

“We’re so happy to have these guys back,” said Marc Nathan, show promoter for the Baltimore Comic-Con. “We have a lot of friends in the industry, but between their obligations and the limits of physics, we can’t always have them back. But this year, Francesco, Ron, Stan, Doug, and Kelly are back, and we’re thrilled they’ll be rejoining us. We’re looking forward to seeing them, and their fans will be excited for their return.”