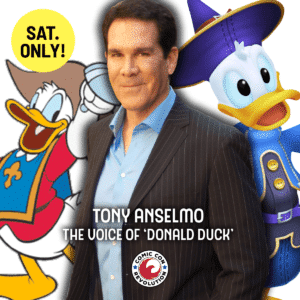 Tony Anselmo, Disney Legend and the official character voice of Donald Duck, is coming to Comic Con Revolution – Ontario May 18th (Saturday Only)!

Tony Anselmo was inspired by the first movie he ever saw, Mary Poppins. By 1984 he took on the role of Donald Duck and is just the second voice actor to bring Donald to life. He was named the official voice of Donald Duck and has voiced him in cartoon shorts, animated features, animated TV series, video games and much more. Don’t miss your chance to meet an official Disney Legend.

Buy your tickets early, save money and get a free limited print (pro tip, scroll down!) and early access to the show floor. New this year, you can now save time and skip the badge pick up line* by getting your tickets mailed to you!

For more information about Comic Con Revolution Ontario 2019 head over to our website: www.ComicConRevolution.com