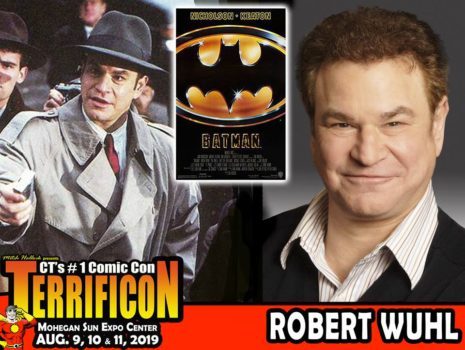 TERRIFICON will be spotlighting the 30th anniversary of the BATMAN film with Robert Wuhl and other guests and events, as well as the Dark Knight’s 80th anniversary on August 9-11.

TERRIFICON welcomes actor/comedian ROBERT WUHL to his first ever comic con appearance – happening at Mohegan Sun! Fans know Robert from his roles in classic films like Good Morning Vietnam, Bull Durham and the star of Arli$$, but most notably as reporter Alexander Knox in Tim Burton’s 1989 Batman!

Whether performing as an actor, writer, producer or director, ROBERT WUHL refers to himself as one thing — a storyteller.

Critically praised for his work in films such as Bull Durham, Good Morning Vietnam, Mistress, Blaze, The Hollywood Knights, Blue Chips, Good Burger, and Cobb, Robert is anxiously looking forward to the 30th Anniversary of Tim Burton’s BATMAN, where he created the legendary role of dogged reporter Alexander Knox.

Perpetually in motion, Robert recently completed filming on the Martin Scorsese Executive-Produced movie, Shirley, starring Elizabeth Moss, about the life of horror author Shirley Jackson (“The Lottery”, “The Haunting of Hill House.”) In addition, he is having a blast on Seth Mcfarlane’s AmericanDad” playing a recurring character named Robert Wuhl.

In 2018, Robert co-starred with Harry Connick, Jr. in the musical version of the Oscar-winning movie, “The Sting,” which played to sold-out audiences at the prestigious Paper Mill Playhouse, recreating the crooked-cop character that his friend Charles Durning played in the original movie.

Twice honored with Emmy Awards for writing the Academy Awards telecasts hosted by Billy Crystal, Wuhl also received CableAce Best Actor nominations in both drama (Tales from the Crypt), and comedy (Arli$$). As a comedian, Robert starred in his own HBO Comedy Hour titled,” Robert Wuhl’s WorldTour,” was a frequent performer on “Comic Relief,” and created two Award-winning HBO Comedy Specials, “Assume the Position with Mr. Wuhl,” and “Assume the Position 201” in which he lectures actual college students about “The stories that made up America, and the Stories that America made up.” He directed, wrote, and starred in the independent feature, Open Season, and his play Hit-Lit had its World Premiere at the Queens Theatre, in New York City.

Robert was the creator and star of ARLI$$, one of the longest-running original series in HBO history. During its seven seasons on HBO, ARLI$$, a satire of the world of professional sports, achieved a rare feat, growing in numbers each and

every year, as it crossed the line between comedy and dramatic social commentary, presenting such issues as Domestic Abuse, Homosexuality, Ageism, Racism, Alcoholism, and Steroid abuse in sports.

A sports fan, Robert is tremendously proud that he’s asked to be a regular guest on THE SPORTS REPORTERS podcast with three of the best journalists of our time, Mitch Albom, Mike Lupica and Bob Ryan. Robert was also a contributor to 60 Minutes Sports on Showtime.

A hotel and travel buff, Robert also filmed a pilot in Paris for the Travel Channel based on the #1 best-selling book travel book of all time, “1000 Places to Visit Before You Die.”

But, in the beginning… after High School in Union, N.J., Robert headed to the University of Houston (where artist and director Julian Schnabel was his roommate). Leaving Houston, (“After cramming four years into seven”), Wuhl returned to the east coast and began performing at The Improv in NYC. His routines were so well received that the great Rodney Dangerfield hired Wuhl to write jokes for him. It was also at the Improv where he met his future wife, Barbara Capelli, to whom he has been married for thirty-five years. Robert headed to Hollywood where he won the role of “Newbomb Turk” in the cult classic comedy, The Hollywood Knights, and became a writer for the critically acclaimed TV comedy ‘Police Squad.” ”The Robert Wuhl Show,” a national radio sports and entertainment talk show for Westwood One, debuted in January 2011.

Wuhl has also lent himself to a myriad of charitable causes including the Alzheimer’s Association of Los Angeles, the National Breast Cancer Coalition, St. Jude’s, Save the Music, Children Uniting Nations, and Heal the Bay.

In his spare time, Wuhl enjoys baseball, an occasional round of golf, baseball, traveling with his wife Barbara, and their four-legged kids, Mr. Max and Sadie Rose, and oh, baseball.

Tickets are on sale now at your local comic shops and Mohegan Sun see our website for details.. https://www.terrificon.com/comic-con-tickets.html