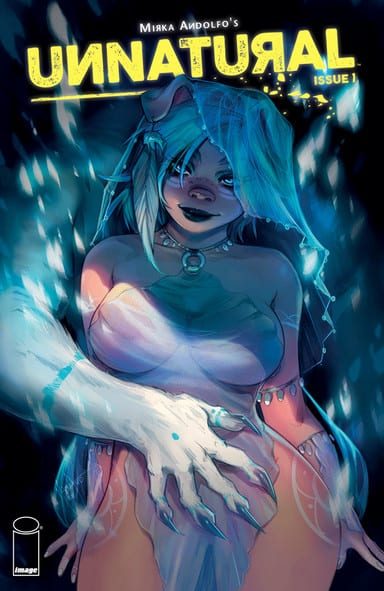 Mirka Andolfo (creator of UNNATURAL and artist of HEX WIVES) appears at Outsider Comics on Wednesday, March 13, 2019 at 7 PM.

About UNNATURAL: Leslie is a simple pig girl. She loves sushi, she’s stuck with a job she hates, and she lives under a brutal totalitarian government-one that punishes transgressors for anything deemed ‘unnatural.’ Leslie dreams of something different for herself. But those dreams are becoming dangerous… This Italian hit series by MIRKA ANDOLFO (Wonder Woman, Harley Quinn, DC Comics Bombshells) will transport you into a colorful but terrible world-full of anthropomorphic creatures, but light on personal freedoms-by way of a breathtaking plot that travels between thriller and fantasy, with a hint of sensuality.

About HEX WIVES: For hundreds of years a war has been waged between a coven of perpetually reincarnating witches and the all-male conspiracy known as the Architects. After the death of the lead Architect in 2005 it seemed the witches had finally defeated their foes. Now, 13 years later, waking up in a perfect cookie cutter home at the end of a cul-de-sac in a sunny corner of suburbia, Isadora has no recollection of her past life as the leader of a witch coven, nor her soulmate Nadiya, let alone the centuries-old war she has waged in defense of the soul of America…