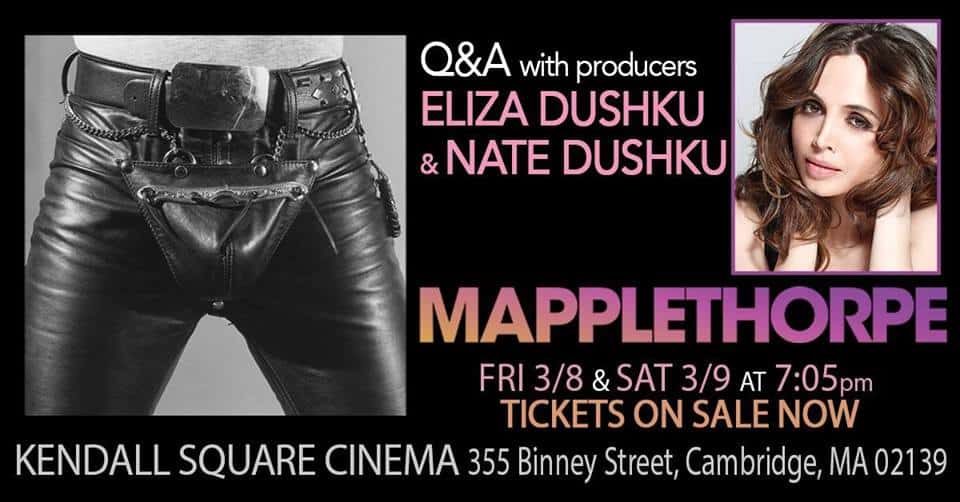 Producers Eliza Dushku and Nate Dushku will be present at Kendall Square Cinema for Q&As after the 7:05 PM showtimes on Friday March 8th as well as on Saturday March 9th. Advance tickets are on sale now!

Arguably one of the most significant artists of the 20th century, Robert Mapplethorpe (Matt Smith, “The Crown,” “Dr. Who”) discovered himself both sexually and artistically in New York City throughout the ‘70s and ‘80s. Filmmaker Ondi Timoner (Dig!, We Live in Public) explores Mapplethorpe’s tumultuous life from moments before he and Patti Smith (Marianne Rendón, “Imposters”) moved into the famed Chelsea Hotel, home to a world of bohemian chic. Here he begins photographing its inhabitants and his new found circle of friends including artists and musicians, socialites, film stars, and members of the S&M underground. Shockingly erotic, his controversial art is rejected by gallery owners, until he meets Sam Wagstaff (John Benjamin Hickey), a wealthy collector who becomes his lover and financial supporter. The film explores the intersection of Mapplethorpe’s art and his sexuality along with his struggle for mainstream recognition. Mapplethorpe offers a nuanced portrait of an important artist at the height of his craft and of the self-destructive impulses that threaten to undermine it all. For mature audiences.