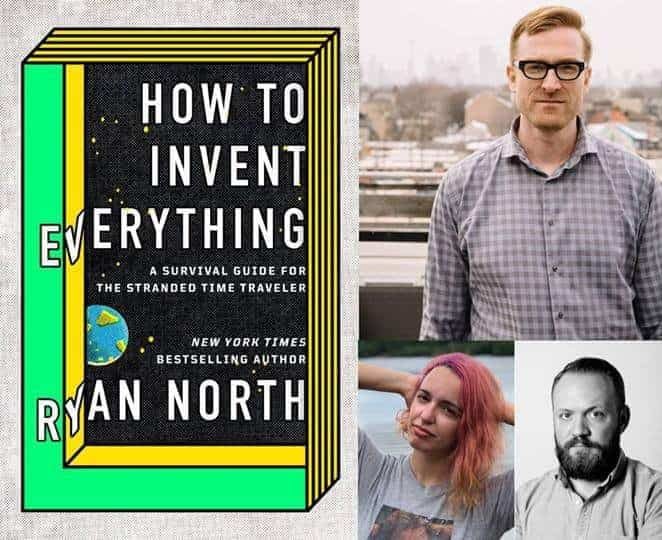 What would you do if a time machine hurled you thousands of years into the past . . . and then broke? How would you survive? Could you improve on humanity’s original timeline? And how hard would it be to domesticate a giant wombat?

Don’t worry: in How to Invent Everything, bestselling author and time-travel enthusiast Ryan North has figured out the answers to those four questions – and more – just for you. This guide contains all the science, engineering, mathematics, art, music, philosophy, facts, and figures required for even the most clueless time traveler to build a civilization from the ground up. Your new world will be one in which humanity matured quickly and efficiently, instead of doing what we did (i.e., spending 200,000 years stumbling around without language, thinking disease was caused by weird smells, and living completely oblivious to the fact that tying a rock to a string would unlock navigating the entire world).

How to Invent Everything is a deeply researched history of the key technologies that made each stage of human civilization possible (from writing and farming to buttons and birth control), but it’s as fun and entertaining as a good time-travel novel. It will make you smarter, more competent, and completely prepared to thrive – in any point in history. And, on the off chance you don’t one day find yourself stranded in time, this fascinating guide to the ideas and technologies that made us who we are today will at least allow you to make some really interesting cocktail-party small talk with a complete stranger.

ABOUT RYAN NORTH
Ryan North is the New York Times-bestselling author of Romeo and/or Juliet and To Be or Not To Be. He’s the creator of Dinosaur Comics and the Eisner Award-winning writer of Adventure Time, Jughead, and The Unbeatable Squirrel Girl for Marvel Comics, and he has a master’s in computational linguistics from the University of Toronto. Ryan lives in Toronto with his wife, Jenn, and their dog, Noam Chompsky.

ABOUT CHRISTOPHER HASTINGS
Christopher Hastings is a writer who mostly works in comic books. He is the author of The Adventures of Dr. McNinja, a continuing online comic series with book collections available from Dark Horse Comics. He also writes the ongoing Adventure Time comic series, and the Unbelievable Gwenpool, which he co-created. Christopher has also written Vote Loki, Longshot Saves the Marvel Universe, and a smattering of Deadpool comics.

ABOUT CARLY MONARDO
Carly Monardo is an artist and performer living in Brooklyn, NY. She has worked behind the scenes on such animated favorites as Venture Bros. and Steven Universe, and in front of the scenes as a house performer at NYC’s Magnet Theater. Look for her on the streets of the city waving at other people’s dogs.