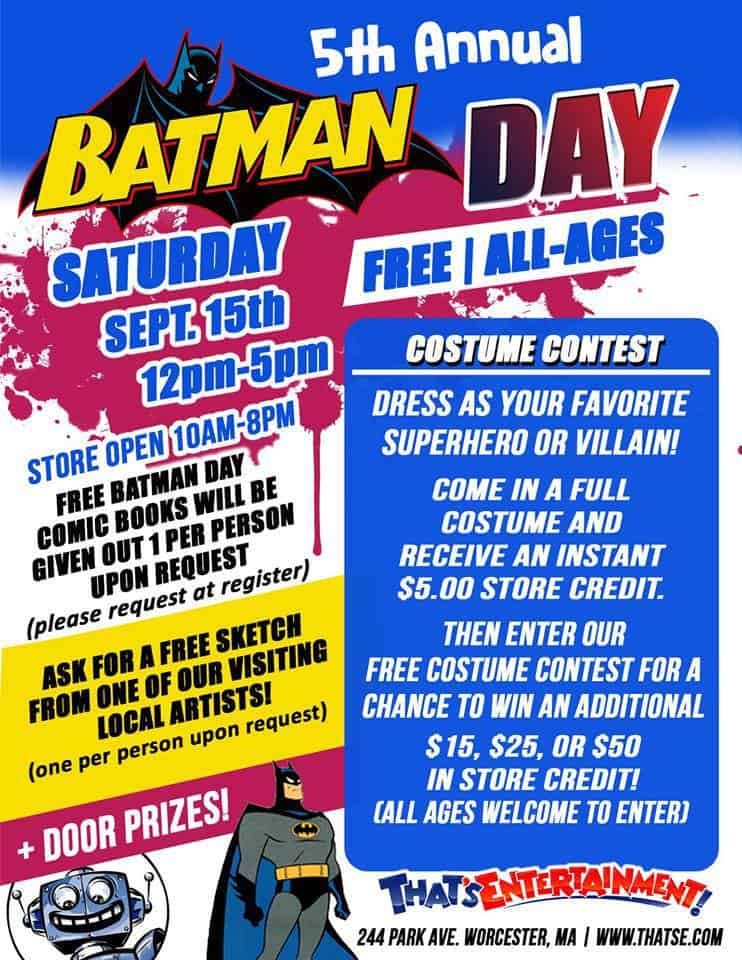 Batman Day returns to That’s Entertainment in Worcester, Massachusetts on Saturday, Sept. 15th from 12:00 p.m. to 5:00 p.m. Guest artists Derek Rook, Bob Noberini, and Alex Barbosa will be offering free sketches and taking small commissions from 12:00 p.m. to 5:00 p.m. Each artist will be giving away a Batman Day commemorative print which will feature his artwork. Requests for commissions and free sketches are limited to one per person from each artist.

Customers are strongly encouraged to cosplay. Everyone who arrives in full costume will receive an instant $5 in store credit. Cosplayers are then welcome to enter in the store’s costume contest for a chance to win first, second, or third prizes of $15, $25, or $50 in store credit. Cashiers will be handing out free Batman comic books and masks to everyone upon request, while supplies last (limit one mask and one comic book per person).

Marketing coordinator Sorana Gatej says, “Last year on Batman Day, dozens of fans came into the store in costume,” she adds. “It’s a wonderful sight, with people of all ages dressed as Batman or his friends and foes milling around and posing for photos.”

According to DC Comics, The annual fan-favorite event, now in its fifth year, was first introduced to honor the iconic character’s 75th anniversary. Continuing the BATMAN DAY tradition, DC Entertainment has combined forces with thousands of comic book retailers, bookstores, schools and libraries across the country to bring fans exciting festivities in honor of Gotham’s protector.

Comic artists and cartoonists Derek Rook and Bob Noberini are both locally renowned for their artistic contributions to the Worcester art scene. This will be a first appearance at That’s Entertainment for artist Alex Barbosa.

Rook has provided artwork for such notable works as Lucio Fulci’s “Gates of Hell” and “Zombie”, “The Dead”, “Deadworld”, and “Gore Shriek”. According to Rook, He was “born and raised on comic books, 70’s exploitation films and rock n’ roll.” Under his comic book company label, Rough House Publishing, Rook plans to release his creator-owned titles, “Beautiful Worcester” and “Angelduster”. He continues to distribute vigilante justice in Worcester, Massachusetts.