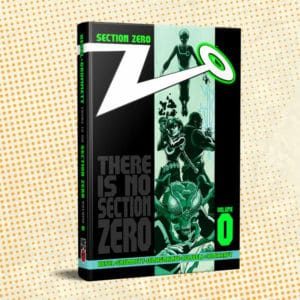 Karl Kesel and Tom Grummett – best known for working together on The Reign of the Supermen and Superboy – will debut their creator-owned graphic novel SECTION ZERO at this year’s Baltimore Comic-Con, September 28-30 at the Baltimore Convention Center. Both creators will be in attendance at the 2018 event.

“SECTION ZERO is sort of Jack Kirby does the X-Files,” says Kesel, adding with a wink, “Of course, there is no Section Zero. It is not a team of experts and adventurers investigating the fantastic and unknown, funded by a secret section of the Untied Nation’s charter. They do not look into monsters, UFOs, and strange things from folklore and myth. Because as we all know – none of those things exist.”

Originally published by Image Comics in 2000, Kesel and Grummett only produced three issues of SECTION ZERO before personal matters forced Kesel to put the project on the shelf. Over the years, various publishers and possibilities were pursued to bring the title back, but it wasn’t until a successful Kickstarter that the pair could return to finish what they had begun 18 years earlier.

The result is an impressive 224-page hardcover SECTION ZERO ULTRA-COOL COLLECTOR’S EDITION – slightly oversized, spot gloss and 5th color on the cover, ribbon bookmark, with a treasure trove of behind-the-scenes material, and an introduction by Kurt Busiek. (Yes – that Kurt Busiek)

The icing on the cake, however, is a gallery of SECTION ZERO pin-ups by some of comics’ top talents. “I basically called in every favor I had in the industry,” admits Kesel. The result was clearly worth it: Dave Gibbons, Chris Samnee, Terry Dodson, Kelley Jones, Jose Luis Garcia-Lopez, Jerry Ordway, Matthew Clark, John Paul Leon, and Ben Caldwell all contributed to the book. “I can’t pick a favorite pin-up,” Kesel muses, “but I do have a favorite character – and I won the lottery when Walter Simonson agreed to draw him! It’s someone who changes into a bug-creature for 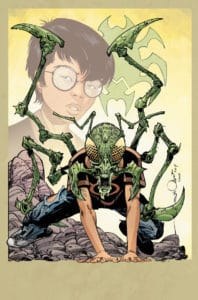 “Returning to these characters and finishing this story is a dream Tom and I have had for 18 years. I almost can’t believe it’s finally, really happening,” says Kesel. “And I can’t think of a better place to debut SECTION ZERO than the Baltimore Comic-Con. It’s a fantastic show – one of the best in the country, you ask me. There’s always a great turnout, a great energy to the show, and great fans.”

To celebrate the book’s debut, Kesel and Grummett will be including a limited-edition SECTION ZERO GREETINGS FROM BALTIMORE postcard with every copy of the book fans take home. “We just wanted to do something special to commemorate the occasion,” Kesel says. “We’ll probably do something similar each time a new book comes out. Because there will be new SECTION ZERO books – I’ve already started working on the next one. It took Tom and me 18 years to get back here – we aren’t leaving any time soon.”

“Besides – who else is going to protect us from everything that doesn’t exist?”