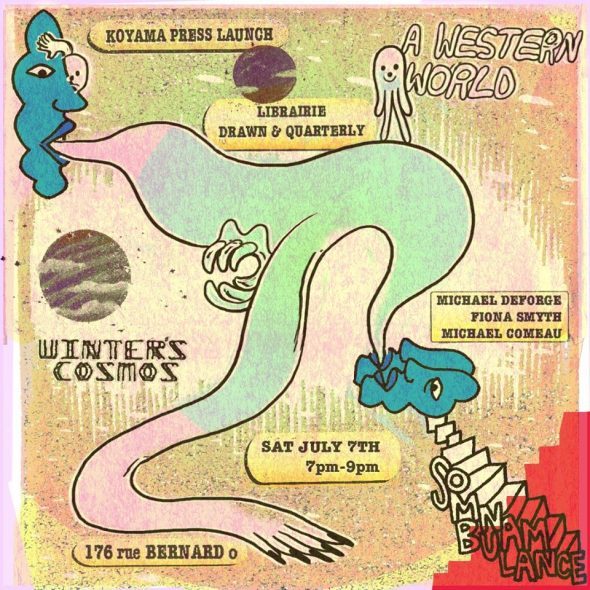 Join Toronto based cartoonists Fiona Smyth, Michael Comeau, and Michael DeForge on Saturday, July 7th at 7:00 PM as they present their latest releases from Koyama Press: Somnambulance, Winter’s Cosmos and A Western World.

Somnambulance By Fiona Smyth
A comics collection by Canadian cartoonist, painter, and illustrator Fiona Smyth. Over thirty years of comics that feature Fiona’s world of sexy ladies, precocious girls, and vindictive goddesses is revealed in all its feminist glory. This is recommended reading for sleepwalkers on a female planet.

FIONA SMYTH is a Toronto based painter, educator, illustrator, and cartoonist. Her feminist artwork has exhibited internationally. Fiona collaborated with writer and sex educator Cory Silverberg on the kids’ series What Makes A Baby in 2013, and Sex Is A Funny Word in 2015, published by Seven Stories Press.

Winter’s Cosmos By Michael Comeau
In the tradition of 2001: A Space Odyssey and Silent Running, this genre-bending photo and comics hybrid presents the final years of a mission to seed a planet in a distant constellation and the failings of both human and artificial psyches in the face of the vastness of space.

MICHAEL COMEAU works on the wall, the print sheet and the page. Creating window displays and paste-up murals utilizing generations of street posters he created for parties, gigs, etc. His comic trilogy Hellberta won the Doug Wright award for experimental comics in 2012.

A Western World By Michael DeForge
Short, succinct and, more often than not, strange stories have always been a central part of the Michael DeForge’s oeuvre. In a career that’s volume outweighs its years, DeForge’s most powerful work has often been his most pithy.

MICHAEL DEFORGE currently lives and works in Toronto as a cartoonist, commercial illustrator and designer for the hit Cartoon Network program Adventure Time. His one-person anthology series Lose has received great critical and commercial success, having been nominated for every major comics award including the Ignatz and Eisner Awards