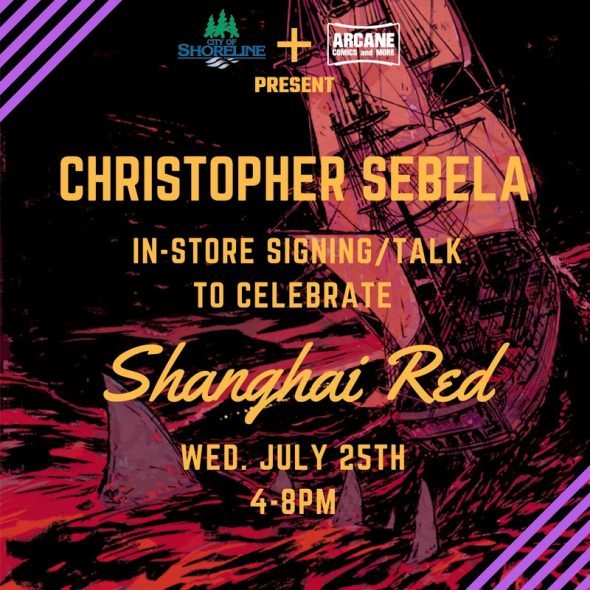 Join Arcane Comics and the City of Shoreline Public Art Program in welcoming Christopher Sebela to the shop on Wednesday, July 25th from 4:00 – 8:00 PM!

He will be here to celebrate the release of his new series, Shanghai Red, with a signing and talk about this period of Pacific Northwest history.

From the Image Comics site:
“Red is one of hundreds shanghaied out of Portland in the late 1800s. Drugged, kidnapped, and sold to a ship’s captain, she wakes up on a boat headed out to sea for years, unable to escape or even reveal who she truly is. Now she’s coming back in a boat covered in blood to find her family and track down the men responsible for stealing her life out from under her. Eisner-nominated writer CHRISTOPHER SEBELA (High Crimes, Heartthrob, We(l)come Back), JOSHUA HIXSON (The Black Woods) and HASSAN OTSMANE-ELHAOU (Felix & Macabber) bring you a tale of revenge, family, and identity that stretches from the deck of a ship outside Shanghai all the way to the bleak streets and secret tunnels of Portland, Oregon.”