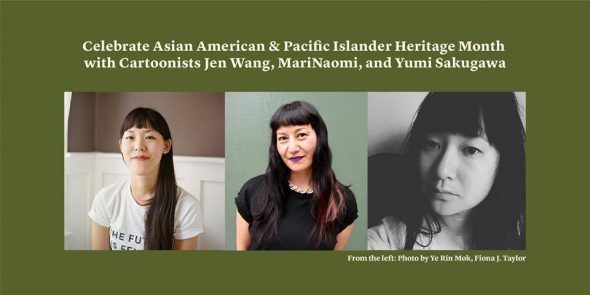 Join The Lev in a conversation with cartoonists Jen Wang, MariNaomi, and Yumi Sakugawa on Thursday, May 31st at 7:30 PM to celebrate Asian American and Pacific Islander Heritage Month.

ABOUT JEN WANG
Jen Wang is a cartoonist, author and illustrator living in Los Angeles. She is the author of The Prince and the Dressmaker, Koko Be Good, and co-author of the New York Times Bestselling graphic novel In Real Life with Cory Doctorow. Her work has also appeared in Los Angeles Magazine, The Believer, Hazlitt, Slate, and McSweeney’s. She has also written for the Adventure Time and Lumberjanes comic series. She is the co-founder and organizer of the annual festival Comics Arts Los Angeles.

ABOUT MARINAOMI
MariNaomi is the award-winning author and illustrator of Kiss & Tell: A Romantic Resume, Dragon’s Breath and Other True Stories, Turning Japanese, I Thought YOU Hated ME, and the Life on Earth trilogy. Her work has appeared in over sixty print publications and has been featured on websites such as The Rumpus, LA Review of Books, Midnight Breakfast and BuzzFeed. She is the founder of the Cartoonists of Color Database and the Queer Cartoonists Database.

ABOUT YUMI SAKUGAWA
Yumi Sakugawa is an Ignatz Awards nominated comic book artist and the author of The Little Book of Life Hacks, I Think I Am in Friend-Love With You and Your Illustrated Guide to Becoming One with the Universe. Her comics have also appeared in The Believer, Bitch, the Best American Non­Required Reading 2014, The Rumpus, Folio, Fjords Review, and other publications. She has also exhibited multimedia installations at the Japanese American National Museum and the Smithsonian Arts & Industries Building. A graduate from the fine art program of University of California, Los Angeles, she lives in Los Angeles.